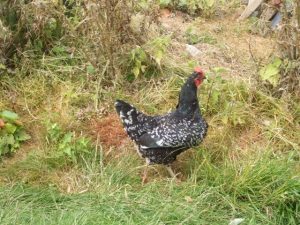 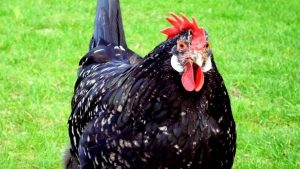 The Ancona Chicken is named after the city of Ancona in Italy. Believed by many to be closely related to the original Mottled Leghorn further imports in the 1890’s and later from both America and Italy concentrated the breed characteristics to the spangled fowl of today.

The Ancona chicken was exported to England throughout most of the 19th century and was brought from there to America in 1888. 10 years later, the breed was officially recognised by the American Poultry Association.

Within Italy they were found in reds, browns and white which would account for the occasional copper appearing in neck hackles it being a genetic throwback. The Ancona has become hard to get hold of and has a “watch” status with the Livestock Conservancy as there is a global population of less than 10,000.

They may start laying eggs at 5 months (20 weeks)

Known to be extremely active and great foragers, they need to be kept in a large space so do not make well for backyard pets. They are hardy so are able to handle harsh winters and warm summers so are able to survive in most climates.

How do I tame Ancona chickens?

Chickens are social creatures and do not cope well by themselves, you should get at a minimum 2 chickens, but 6 would be recommended as the perfect small flock.

Their coop needs to have at least 11 square feet per chicken, but don’t give them too much space as a large coop with not enough chickens means they’ll have difficulty generating enough heat to keep them all warm.

As they are extremely active chickens they do not fare well in small spaces, therefore their run needs to be at least 250 square feet per chicken to allow them to range freely.

Yes, they should mix with other chickens. Problems may arise if your current chickens all have a similar appearance that differs from the look of the Ancona chicken as they may bully the newcomers.

Ancona chickens are available large and miniature but compared to other breeds on the smaller side and have black plumage with a spray of white spots. They have striking yellow legs and beak which have stripe of black on them.

They can have either a rose comb or a single comb, which is more common, with long bright red wattles as in other Mediterranean breeds with a white v shaped tip to the feathers and beetle green metallic sheen to the feathers.

Chicks are very cute and have a combination of white and black patches.

Once they reach 18 weeks you can gradually introduce layers mash or pellets, this feed contains all the nutrients your chickens will need to help them with egg production, this feed typically contains around 16{cfcd481556a8b43fba6af451761032bd323e94372a0c1e607} protein.

Your chickens can eat anywhere between 2.9oz (80g) to 4.2oz (120g) a day. On average a chicken will eat around ¼ (113g) of a pound of feed a day. Try feeding them this amount and adjust according to their consumption.

You could either leave the feed in a feeder for them to eat away at for the day or you could feed them in the morning and evening.

Chocolate and beans are the two most important things that should be kept far away from chickens. The theobromine in chocolate causes heart problems for chickens once consumed and is fatal. Similarly, the phytohemagglutinin found in dried and raw beans is fatal for chickens, so make sure there are no bean plants in the vicinity of your coop.

It is considered illegal to feed your chicken scraps from the kitchen in the UK due to the potential risk for disease contamination. Mouldy foods should also not be fed to chickens as they contain nasty bacteria that can cause health problems.

You should have a minimum of 1.1 or 11 square feet in the coop per chicken. These chickens need lots of space as they are happiest when foraging, at least 250 square feet per chicken is recommended. They need a small perch to sleep on at night as well as a wooden box filled with wood shavings or hay to lay their eggs. Ancona chickens are good fliers so any fences need to be high enough that they can’t fly over. You need a fence over and around the coop that is sunk at least 8 inches into the ground. This should protect them from any predators at night.

Grit is important for egg production so always have some accessible for your chickens.

Where To Buy Ancona Chickens

Although the breed is rare fertilized eggs can be found from hatcheries and shipping to your via the mail!

Chicks can be bought from a few days old.

Maturing laying chickens can be found online through reputable breeders.