So what are the benefits of having a chicken water heater? [apart from not having freezing water]

Well it will heat the whole the coop too! Think of your water tank and boiler at home. Heating water is how you can supply heat to a whole home. A chicken water heater is no different. It will provide heat to the coop during those really cold nights, so you won’t have to worry about your chicks getting cold.

That’s all great in principle but let’s start right back from scratch.

I need a way to stop the water from freezing when its cold out. I have no power in the coop, so can’t run my heated chicken waterer. The coop is just too far from the barn to run a power cord all that way. (I think the ‘cool’ term for this is now off grid….? Am I right kids?)

Now I can train my chickens to sit on a bicycle and pedal and that then powers a heater to stop the water from freezing…or I can buy:

I also need the generator to be:

Why can’t I have solar panels that directly power the chicken waterer?

How much sun is there during the night? None.

*I’ve used the example of during the night as that when it is the coldest and therefore when water is most likely to freeze.

Would it work during the day when the sun is out?

Yes it would, in theory. It would work till the sun went behind a cloud and then it would stop working……

Why is the generator the best way? 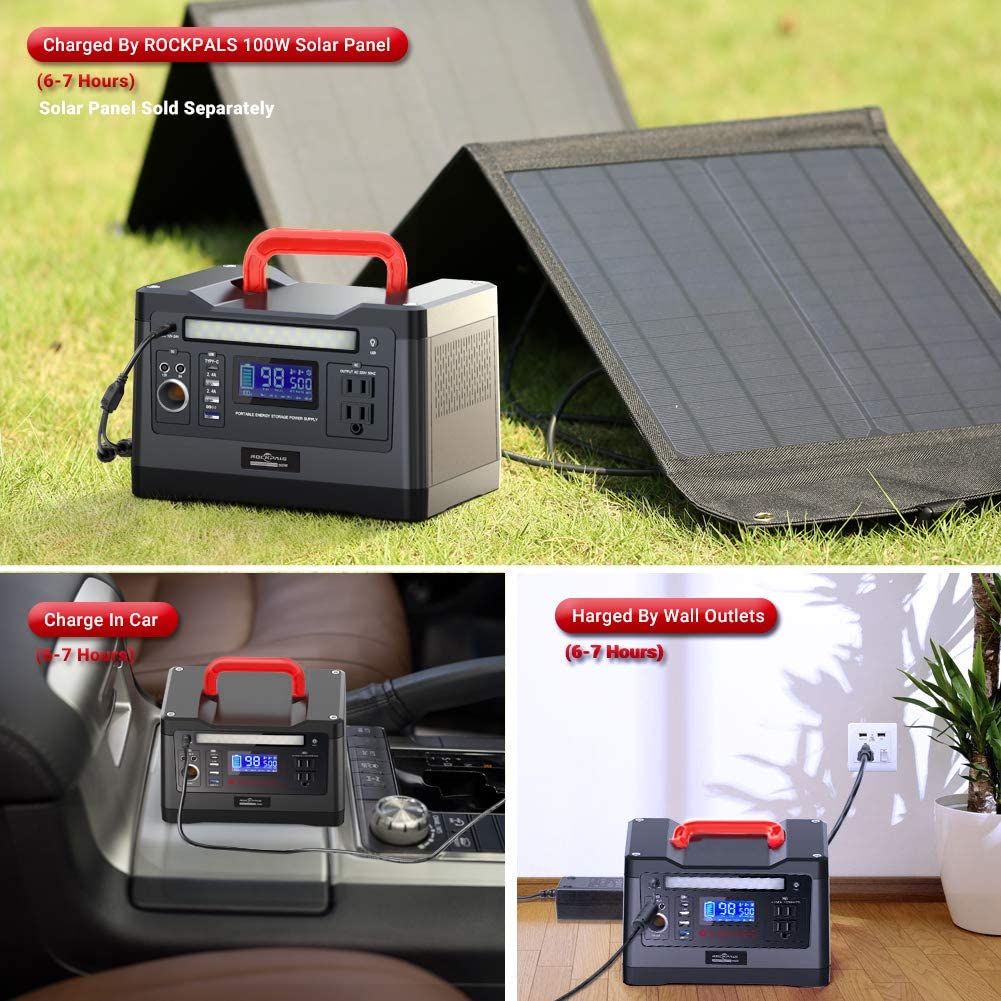 It’s both the inverter and the battery! The idea of the generator is it is charged from the solar panels and can hold that power in its battery. To be then used as it when its required.

It just cheaper and easier to buy a generator and solar panels that comes ready to go. Than having to purchase solar panels, an inverter, batteries all the wiring etc separately. Then have to wire it all up and fit it together!

How does the generator method work?

It pretty basic, the solar panels sit on the roof or wherever they will get the most amount of sun. They will be plugged into (and powering) the generator and I can then plug in to the generator whatever I want powering. In this case the heater to stop the water from freezing.

How long will the power last for?

Powering a 60 watt heated chicken waterer from a full charge would last 8 hours. Doesn’t sound great for the money but let me put that another way.

Let’s assume during the day from the solar panels you can generate enough power to run the heater ok. Then at night, when it’s even colder and there is no sun, you know have a full 8 hours battery charge.

8 hours that’s only enough for one night – I hear you scream?

The water will then slowly cool until it reaches the same set point and then the heater starts again. This ‘cycle’ just repeats over and over again.

So how long will it REALLY last for if it’s not in constant use?

What do I do when it’s really REALLY cold to get even more usage?

Below 12F I don’t fill the waterer to the top. It’s that simple. I use half measures. That way it doesn’t have to work as hard so doesn’t use as much power heating excess water that the chickens wont drink anyway.

How much do chickens drink anyway?

Let’s assume you have 6 chickens that at total of 30floz (900ml) per day. As they drink slightly less in the winter when it’s cold compared to the summer when it’s hot.

You don’t. It’s just wasting power to heat water than won’t be drunk.

Don’t want to fill up the waterer every day, ok put 2 days’ worth in there. That’s fine, the principle is still the same – just over fill it unnecessarily.

How much usage did it get now?

Using this new method, I then could power the heater for days on end, rather than hours or just a couple days. Work smarter not harder as Dad says.

You can buy the 500W Generator & Solar Panels here on Amazon.

If you need a heated chicken drinker you should get this one. Its 2 gallon and is 60W so has a very efficient heater that won’t draw as much power as a 100 or a 120 watt one. Why drinking nipples – because they are freeze free! It can be hung up or placed down flat too.

The best one I found was the one I’ve already recommended above, get it here.

Why was that one the best?

What else can I power with the generator?

A light in the coop to help them lay more into the winter and start laying earlier in the spring. I’ve got a light rigged up off mine. It will power a 40W bulb for about 80 hours off one charge. Perfect!

Chickens lay less in the winter when there is less light and the days are shorter. So increase egg production by adding a light into the coop. Using a timer I have my light come on at 6am when it’s still dark out. Then it turns off at 9am. Then it turns back on at 5pm when it gets dark and it stays on till 9pm. It directly mimic’s the daylight hours of summer.

So I get summer egg production, in winter. All powered for free from solar! The generator will pay for itself back in the extra number of eggs laid very quickly!

I use mine for powering the heated waterer in January, our coldest month. And in October December and Feb and March (the months either side of Jan) I use it to power the coop light. Then the rest of the year its mine. In the summer I take camping up into the parks and its awesome!

You could power heated roost bars or coop heater, yep didn’t even know that was a thing, but check them out they look cool.

Great as well if you have a power out, I recommend every home has the ability to generate at least some off grid power, mainly just in case of any emergencies, but you never know what you might need one for……

Don’t like that idea or don’t want to buy a heated waterer.

For years I’ve been heating our aquarium at home with a 7.5Watt water heater and they are cheap at around 15 bucks. Then it finally dawned on me I could do exactly the same thing outside for the chicken water.

It will heat 2.6 gallons (12L) quite happily and using only 7.5 watts to it, it’s astonishing. Using the generator, with a full charge from the solar panels you would get 64 straight hours of power! That’s without even using the solar panels to recharge and keep on going.

So using the solar panels you are talking about generating power for weeks and maybe months! Now that might be too much for some people (NOT ME!) so you could:

Now you can do 2 things here. You can save money by not purchasing solar panels with the generator. Yes that won’t make it strictly a ‘solar chicken water heater’ but hear me out….

Instead just charge it at home every few days, to fully charge takes about 7-8 hours, it just plugs right into your sockets at home. Bingo. Ok that was the spend less bit.

Downgrade – you might think a 500W generator is too much for this aquarium heater. So then downgrade to the 300W or even 250W. Hey you might not want to, the choice is yours. I’m frugal, but if I’m going to buy something, I usually buy it with just a bit more juice or poke than I need. Just in case. Plus, im using it for light too…but anyway the choice is yours.

So let’s recap, you’ve got your generator, and your super happy with that, what else do you need?

This is what you need to buy?

Now here’s the bit you’ll love; you need the cheaper heater WITHOUT the thermostat.

This is because they are designed to keep fish tanks at +68F (+20C). The thermostat tells the heater to start running at around the high 60’s(F) so that you can keep the tropical fish happy.

That’s far too hot for water for chickens. So we want to save money and buy the one without the thermostat.

Chickens actually like drinking cold water anyway over warm water. We aren’t sure why it’s just a prehistoric throwback. So all that warm water would be wasted anyway, let alone the power it would waste heating it.

What does the heater without the thermostat do?

The one without a thermostat will always keep the water at 44F (7C) above the room temp. Or coop temperature in this instance! That’s perfect for what we need, so if its 23F (-5C) outside then the heater will keep the water at a respectable 35.6F (2C). Now that’s cold water, but it’s not freezing, and that’s win in my book.

I’m not the only person to have done this, I’ll admit, so for some photos and to read about how someone else achieved what we did check out the link here:

Important – I need your attention:

That’s all you need to create a solar chicken water heater. Get creating now!