Our chicken coop is on its last legs! I made it as sturdy and as robust as humanly possible firstly its on metal frame with steel tractor tires, and that is all still in good condition. But wood has a finite lifespan, nothing lasts forever, even if you sand it, vanish and paint it each season like we have! 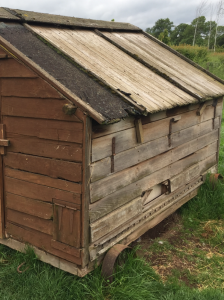 Time to look for a new one, which means hours, trawling the web and reading reviews. We have had literally dozens of coops on our farm over the years, im a proud 4th generation chicken owner, and in that time we have had some useless coops and some awesome ones. I’ve made a good few myself, added bits, extended them, added tires to turn them into tractors. I’ve had and done the lot, it been great fun.

So I know what works and I know what doesn’t. What doesn’t, breaks and usually very quickly costing you money. Its safe to say we have spent into the thousands, buying coops, and over the years so I’ve developed a strict criteria for buying coops. This criteria will help shortlist the best chicken coop for 12 chickens so you don’t waste any money. I’ll share it below.

How big a chicken coop for 12 chickens?

Chickens will need 3 to 4 sqft of coop space per bird. Now that’s calculated by floor space which is fine so chickens can move around get to the waterer for a drink and don’t over heat with a flock size too large for the coop. But there’s 2 more points

You will need 1 nesting box per 4-6 birds an your chickens will probably only use 1 or 2. Its odd, they pick a favourite box or two! It’s a complete myth that each chicken needs its own nesting box…..

What Makes a Good Chicken Coop:

Absolutely critical even if you live in a cold climate. You need that air flow. Air flows both ways, people mainly only think of it as a one way street and it’s not.

Heat, pressure and moisture flow hot to cold or high to low.

When its hotter inside the coop, than outside, the heat direction of travel will be outward.

So too cool a coop its not cold air flowing in that allows this process, its actually allowing the outflow of hot air that will cool the coop.

Chickens can suffer from heat stroke very quickly and easily and this causes them to be put off laying or worse. This is why they also need to have access to fresh water. Having water in just the run isn’t enough. During the night if it’s hot they will need to hydrate.

High levels of moisture can build up in chicken coop from the chicken poop. This poop contains ammonia, highly levels of ammonia causes respiratory issues amongst chickens.

Again ventilation is both in and out and is super important. I try and look for coops with vents at floor level as cold air and moisture fall, and vent(s) at the roof level as hot air and moisture rises. This will allow natural convention to occur which will keep the coop at optimal temperature, which is around 68F (20C).

So most manufactures know that ventilation is critical and so most now have vents (always double check). Some, manufacturers though do something really silly……

If you place a vent infront of the roosting bars where the chickens sleep at night you place them directly in a draft. This will mean your chickens will catch cold, get sick and will again stop laying or worse.

If you live in a cold windy area pay particular attention to the direction you position the coop.

Best positioning for vents is in the middle of the coop or nearer the nesting boxes as at least they can be cooled during the day whilst they are hard at work laying your wonderful eggs!

If you’ve ever had a predator get into the coop you know the consequences can be so damaging. Its especially tough if you have kids. We had a fox get into the coop and it killed everything, only to take just one of our hens. It was such a sad time.

You need a coop that’s predator proof. Things like, if there are windows on the coop make sure they have screens covering them so nothing can sneak in. It will also help to keep the flies out.

Make sure the roof tiles or roof panels can’t be individually removed, I’m thinking raccoons here, they are crafty. But foxes and coyotes can also jump onto the roof and gain access.

And if there’s not floor on the coop, i.e it just sits on the earth. Make sure nothing can dig under.

The siding, make sure nothing is sticking out so something can gain purchase to remove this panel. Having a sturdy design will mean nothing can bite or rip its way in either…

Yes as to help keep predators out having a well-built sturdy design is paramount. But you also need a coop that’s going to last!

I’ve had roofs leak on me after a month and I’ve had a chicken pop door break after just a few weeks. Its just hassle you don’t want.

Treated Wood [or not to treat wood that is the question]

It’s an issue that most people have an opinion on, as most wood treatments contain chemicals. For me it’s simple, treated wood will last so much longer than non-treated and I need longevity from my coop. The choice is yours however…

Chickens will want some shade during a hot sunny day to cool off and relax. As I’ve already said its so easy for chickens to overheat. When chickens do overheat the consequences can sometimes be dire. Look for signs of lethargy or them not wanting to leave the coop. 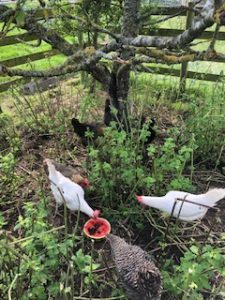 I actually have to feed mine (see pic) high water content fruits when its warm to keep them fed, as their appetite drops when its warm, and hydrated. Water melon is absolutely brilliant for this, its all natural too!

Anyway I was talking about shade – its vital to offer it to chickens and its where you should place down the waterer as chickens prefer cool water. No one is sure why, we think its a prehistoric throwback.

Using this criteria I’ve made a short list, so all you have to do is pick one! 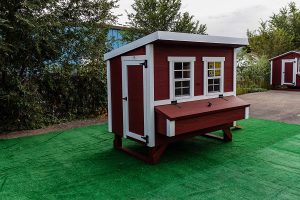 Has 4 great design, features that include:

What we didn’t like: Can’t put it together on your own, its comes flat pack, and the pieces can be heavy. *Takes slightly longer to build, on average taking people 1.5 hrs.

Best Chicken Coop with Run for 12 Chickens [Coops and Feathers] 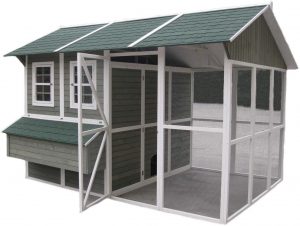 What’s could be improved: Wood thickness for extra sturdiness. It also has no screen protectors for those windows which arent facing into the run so are exposed. Not a huge deal as the coop and run are well ventilated anyway, so might not need them open.

DIY Top Tip:  If you wanted screen protection over the windows when they are open, place up some chicken wire and cover with ladies tights to prevent flies.

Most Versatile and Flexible Chicken Coop for 12 Chickens [Giantex] 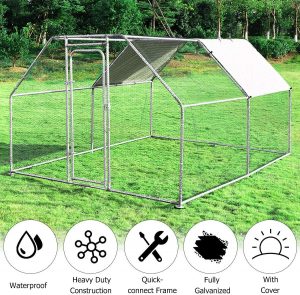 We have this solution on the farm housing our Cochins and it works really well. Giving them the safety and space to forage and roam.

What would make it better: Easily add an electric fence around the perimeter like we have done in the pic. 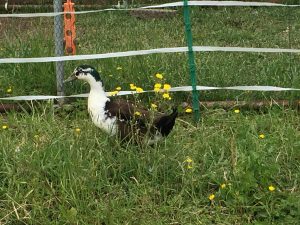 Please ignore the duck it likes hanging around with the chickens!

So there you have it: The Best Chicken Coops for 12 Chickens & Why – I really hopes this helps saving you time trawling the internet & money.