What is Scaly Leg Mite?

Aptly named as these spherical 8 legged mites that tunnel under the scales on the legs of chickens. However they don’t stop there at the legs, the feet are also an effected area, with also fairly infrequent occurrences of the mites attacking the comb and wattles too. The name is therefore somewhat misleading.

The entire duration of the mites life will be spend under the skin, as it is sarcoptic mite.

Chickens with the infection suffer from painful irritated legs and will struggle from immobility but if left untreated after several months they can die from the afflictions.

It originates from wild birds, or birds newly introduced into the flock already carrying the infection. Contact is the only known way it spreads as mite dispersion is often ruled out.

The mites can remain dormant for some time, until stress triggers the population to increase and in some cases savage the bird.

The most commonly affected birds from scaly leg mites are those in the later stages of their lives. Its unfortunately self-perpetuating, the stress of the infection causes the mite population to increase further and symptoms then are exacerbated and worsen.

Its important then, to try and diagnose early symptoms.

Symptoms are usually easy to visually identify in the later stages but can be harder in the earlier, perhaps dormant stages of the initial infection.

Early signs are general irritability of the chicken or difference in ‘character’. The scales on the legs then begin to harden and thicken often looking drier or paler in some breeds and the toes can start to curl too. This can sometimes cause chickens to try and peck or scratch their legs as they are irritated.

Later stages include the lifting or raising up of the scales from the leg and foot. The scales look even harder or ‘crusty’ and unsightly. Mobility will be reduced as the bird finds it difficult to walk in pain often toe curl can worsen. Therefore look for birds resting unnaturally, spending more time in the coop or walking with a limp or unusual gait.

Chickens legs naturally have scales, this shouldn’t cause you to therefore think there is any issue. The most common misdiagnosis is actually often in young birds that are still developing and growing. As their legs naturally grow,  they develop the scales on their legs. This is all normal and without issue.

As you can see im my photo below this healthy [British Champion] Indian Game Bird naturally has short, thicker legs with visually larger scales than some other breeds. Again this is normal and this bird is healthy. 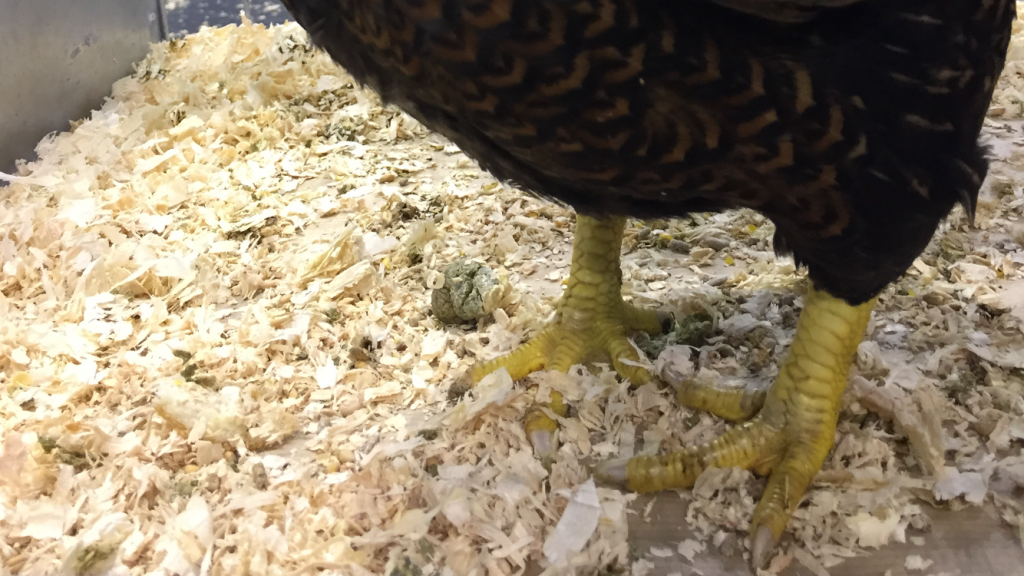 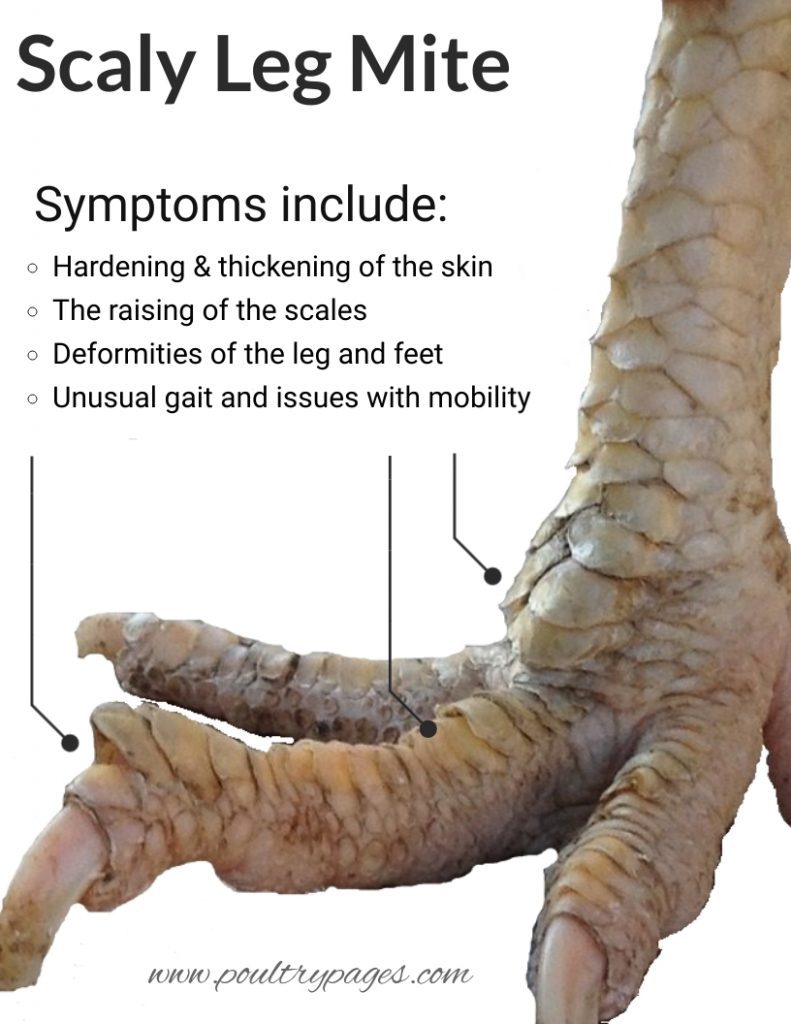 Thorough cleaning of the coop the run and common areas must be undertaken. Common areas including anywhere the chickens can travel or self clean i.e a dust bath. The underneath of the coop must also be cleaned and the ground, if any, below that.

Recommended cleaning is using a pressure hose with sufficient force to ensure access into hard to reach areas.

Treatment dusting of dry freshly sanitized areas is also seen as effective. However if you are planning to use Dimethoate and Fenthion or treatments containing such ingredients, best practice would be remove all birds, infected or not from that area whilst this is treatment process is being undertaken.

For this reason it is important to thoroughly remove scaly leg mite from the infected areas to prevent a return of the mite as second treatments could be ineffective due to mite tolerance.

Whilst Diatomaceous Earth is usually recommend amongst backyard poultry enthusiasts for treating scaly leg mite within the coop or common areas, it is not seen as effective unlike when used to treat other mites like ‘Dermanyssus Gallinae’, commonly referred to as red mite, or roost mite.

Scaly leg mite are a totally different mite species to red mites, requiring different treatment. Scaly mites aren’t though to travel or mite disperse, i.e leave the host [the chicken] and walk or live elsewhere before returning or finding another host bird.

Affected birds should be separated from the unaffected birds within the rest of the flock and treated immediately.

Most common home readies for Scaly Leg Mite include practices that suffocate the mites, which kills them.

How to naturally treat scaly leg in 5 simple steps

This is best done in the evening or at night so the chickens are less active and wont rub or get as much dirt into the ‘Vaselined’ areas.

It can take several months for treatment of this nature to be effective.

If this treatment proves ineffective you can try something stronger than placing the chickens legs and feet in warm water. Some have used ‘mineral spirit’ or ‘white spirit’ however I don’t recommend this, being that if the idea is to suffocate the mites, the proposed strength of the application has little barring. It also would cause potential issues for treating booted chickens ie ones with feathered feet.

The scales should look ‘normal’ again a year after successful treatment has finished.

What is it Ivermectin?

Ivermectin is a lipid soluble medication that originated from Avermectin, developed to treat parasites such as worms, not tape worms however, and mites within small birds such as parrots or pigeons. It is also used however for rabbits or Guinea pigs but is also used as an easy, fast and effective treatment for scaly leg mite in chickens

It is used for treatment of chickens ’off label’. This term is given to medication given to an animal it wasn’t initially designed for.

Despite being off label many back yard chicken enthusiasts have seen, when used correctly the benefits of it treating scaly leg mites and worms for chickens. According to the ‘Merck Vet Manual’ Ivermectin treatment of chickens suffering from scaly legs mites should be oral or topical.

Dosage of Ivermectin to treat scaly leg mites in chickens

Due to the ‘off label’ usage, dosages can be difficult to administer for chickens it should also be approached in the correct manor as Ivermectin can be administered in three forms, injected, orally or topically. Plus it comes in three different strengths or concentrations those being 1 percent, 5 percent or 10 percent.

Manufacturers of Ivermectin therefore prescribe the dosage by the weight of the animal and its prudent to adhere to this unless you have sought veterinary advice to this contrary. In which case follow that professional advice.

The same brands aren’t sold in countries like the UK as they are in the US so ill detail the relevant country and dosage below:

The brand ‘Durvet’ makes ‘Ivermectin Pour On’. The manufacturer states dosage as 1mL for every 22lb of body weight. By my calculation that’s is 0.045ml for each lb the chicken weighs. The calculation is expressed simply as (1(ml)/22(lb)).

When I used Ivermectin I calculated it as a total solution of 0.36ml is required for a bird weighing 8lb.

A drop is measured at 0.05ml. So to calculate total drops you divide the total amount required for one chicken (0.36ml)/0.05(drop measure) giving you 7.2 drops.

Read the excerpt from the label below and follow instructions from the manufacturer:

A relatively small dose is required for chickens compared to the size of the bottle, what might be prudent then is to obtain a bottle with a dropper in the lid and decant some.

This could make it easier to administer the Ivermectin, which could be done best, when the chicken are asleep and therefore still.

Application best practice is placing the correct Ivermectin dosage directly onto the skin on the back of the birds neck.

These calculations cannot be applied to any other Ivermectin brand or product, other than the two foremost mentioned in the links above as the strength varies amongst manufacturers of Ivermectin as does the administering of it [oral, topical or injection].

Ivermectin is sold on Amazon too, as the brand name Pharmaq.

The required dosage would be calculated as 3500/500 = 7. Therefore the total number of drops required for a mature weight Leghorn chicken is 7.

This is an example and should not be constituted as individual advice for your chicken. I am not qualified for medical animal consultancy, so please read the manufacturers label and follow the instructions carefully.

These calculations cannot be applied to any other Ivermectin, other than the two foremost mentioned in the links above as the strength varies amongst manufacturers of Ivermectin as does the administering of it [oral, topical or injection].

In most cases repeat application 2 weeks after the initial treatment. You should start to visually see sign of the success in the first 2 weeks, with the death skin scales loosening and/or falling off completely.

The Vaseline method on the legs can be used along with the Ivermectin to aid the treatment. It has been reported as helping to soften the skin and aid further removal of the dead, infected skin.

Side effects of Ivermectin

Side effects can include but may not be limited too:

Ivermectin is also used ‘off label’ as a ‘chicken wormer’ to combat the parasites. It could be seen as prudent then that any other worming treatment be ceased during the Ivermectin treatment.

What is a withdrawal period?

A withdrawal period refers to the length of time after the Ivermectin treatment has ceased, that meat or eggs from the previously infested bird be allowed into human consumption. The difficulty lies in its ‘off label’ use so little studies or research has been done to further expand the knowledge on the issue. However F.A.R.A.D states:

‘’ Depletion of ivermectin residues in the eggs of treated hens has been investigated in only a couple of studies. Given the limited studies and data available, FARAD cannot provide a blanket withdrawal interval recommendation’’

Some Ivermectin manufacturers do state that withdrawal should last for 7 days.

Manna Pro make ‘Protector’ in handy easy to use spray bottle. It is natural solution containing no hard chemicals. The ingredients are .1 percent potassium Sorbate and remaining is water, yeast and citric acid.

Spray on to affected area, as per the manufactures.

No side effects reported with no egg withdrawal, possibly being that it’s all natural. Often reported however that this is best used as prevention rather than treatment for the infection.

The course of action depends on the methods you are most happy with carrying out and the severity of the infection within the bird.

My own findings of dealing with a severe case on scaly leg mites was that Ivermectin worked quickly and effectively.

It was more expensive however, than other methods. Within the first two weeks after treatment the infected skin was healing and dropping off.

I had sought advice ‘online’ from other backyard enthusiasts but found people were was confusion between mites. Often even just stating the word mite rather than which actual one, i.e north fowl mite, red mite, tropical red mite etc. The lack of knowledge on the subject and commonly available knowledge led to my own research.

I therefore thank the people I contacted, who then aided in this guide to note down my findings of the best way to treat scaly legs mites.