The Andalusian Chicken is named after the Province of Andalusia in Spain and is one of the oldest Mediterranean breeds. They were developed from white and black birds imported in around 1846 also shown at the Great Exhibition in 1851.

Blue Andalusian Chickens are credited with being natives of Andalusia, a province in Spain. They originated from crossing a black fowl with one of its white sports, these two colors producing a bluish-slate fowl.

In Cornwall and Devon, England, similar blue fowls were produced by crossing black and white sports. This was before Andalusian Chickens were imported into England. They resembled the earlier Andalusian Chicken in type and color. The incidence of Black birds was increased with crossings with the Black Spanish and Minorca which substantially altered their shape from that of the early birds.

The modern Andalusian Chicken should be symmetrical, graceful, compact, medium in size, and stately in carriage. The dull and uneven blue colored fowl of the past has been transformed into the attractive, laced breed of today by years of scientific breeding. This was the breed that the early geneticist Gregor Mendel used in his experiments into color heredity.

Show birds are blue with lacing, black and splash colors are also produced but are not permitted to be shown although the splash females are worth using within a breeding program. The males weigh 7-8lbs (3.2-3.6kg) and the females weigh 5-6lbs (2.3-2.7kg) 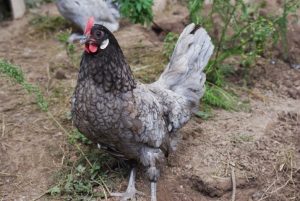 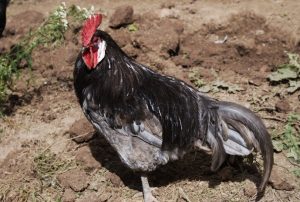 Andalusian chickens mature faster than other breeds and so start laying earlier, expect eggs before they reach 6 months.

Whilst quieter than most Mediterranean birds, they are still noisy chickens. They don’t particularly enjoy human contact and prefer to roam free so the are not the best breed to be kept in your backyard.

How do I tame Andalusian chickens?

Andalusian chickens aren’t fond of human contact but are still fairly friendly so may be difficult to tame. It is easier to tame them if you get them whilst they’re still young so you can get them used to human contact. Try handling them from a young age and feeding them out of your hand.

Chickens don’t survive well by themselves and at an absolute minimum you need 2 chickens. However, it is best to have at least 6 chickens so they don’t get lonely.

They need 11 square feet per chicken in the coop and at least 10 square feet in a separate run so that they can exercise during the day, but they do not thrive being kept in confinement and prefer to be free range, therefore they need at least 250 square feet of space.

Andalusian chickens are known for being blue but can also be white or black. The most common color is a light blue with black lacing. They have a single medium sized comb with 5 points, smooth white earlobes and black legs which are clean of feathers. They typically carry a long body and tail at an angle of 45 degrees with each feather lightly laced with black edging. Andalusian skin color is white. 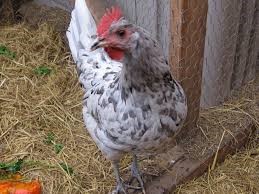 Grower’s mash should be fed to your chicks until they’re about 6 weeks old. Grower’s mash I is refined chicken feed that has a high protein content to support their development. Once they reach 6 weeks switch them to chicken pellets which is a pelletized form of chicken feed, these have a protein content of 15-16{cfcd481556a8b43fba6af451761032bd323e94372a0c1e607}. After 18 weeks your chickens will be getting ready to lay eggs and it is recommended that you gradually switch them to layers mash or pellets which have a protein content of 16{cfcd481556a8b43fba6af451761032bd323e94372a0c1e607} and contain all the good stuff that will help them with egg production.

It I recommended that you feed your chickens between 2.9oz (80g) and 4.2oz (120g) a day, the average size chicken tends to eat ¼ of a pound (113g). The amount you feed them should be dependent on how much they eat so if they not eating all that you give them be sure to lower the amount you feed them. You can either leave feed in a feeder for them to snack on all day or feed them morning and evening.

The two main things that chickens should be kept far way from are chocolate and beans. Chocolate contains theobromine which once consumed can be fatal for chickens. Dried or raw beans have phytohemagglutinin in them which can also cause fatalities once consumed. Keep any bean plants far away from you chicken coop to make sure your chickens can’t get a hold of any. Mouldy foods also cause lots of problems for chickens as they harbour bad bacteria that can make them sick. In the UK it is considered illegal to feed chickens scraps from your kitchen due to potential for disease contamination.

You need at an absolute minimum 11 square feet (or about 1.1m2) per chicken in the coop with a little perch for each of the chickens to sleep on. Hens also need a wooden nesting box filled with wood shavings in which they can lay their eggs. Water containers that can’t be knocked over or stepped into are best. Try and place the water away from direct sunlight as chickens prefer cool water. Grit is vital to egg production so always have some accessible to your chickens, they’ll help themselves. Wire fencing sunk at least 8 inches into the ground and ran all around the coop including over it is important to keep your chicken safe at night from predators.

An active forager; good backyard layer plus superb show bird, quieter than many Mediterranean’s (i.e. not mad and scatty!) my males do not fight and are very calm. Non sitter; but good winter / spring layer. Available large and miniature.

They are larger than leghorns, active and quite talkative hardy, rugged and robust bird, that doesn’t really like confinement so will really will flourish in free range conditions.

The females of this breed will often lay at almost impossibly early ages. Very fast runner . . . invest in a landing net!