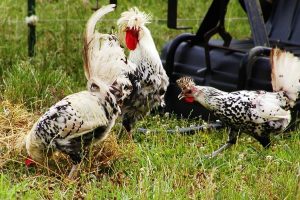 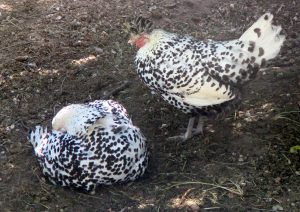 There are two main types of this chicken breed. The Appenzeller Spitzhauben and the Appenzeller Barthuhner. . . there is no international bantam standard at the moment although there is in the USA. Although originally from Switzerland and bred there for centuries they have only been shown in the UK since 1982.

They were named after the local lace bonnets worn by the ladies of Appenzeller. These bonnets are part of their national dress. These birds are similar to the Yorkshire Hornet which is now sadly extinct.

Many older photographs and breeders stories confirm that the Hornet and the gold Spitz were identical. The most popular color in the UK is the Silver Appenzeller Spitzhauben.

They are very hard to find in America and are not recognized by the APA. These birds are on the light side with males weighing 4.5lbs (2kg) and females weighing 3.5lbs (1.6kg)

They start laying eggs at 6 months.

They’re smart and resourceful and are able to feed themselves by foraging insects. They’re flighty birds so you may find them nesting in a tree.

Large dark brown eyes and black legs. A V shaped comb and a silvery white feathered crest in both females and males, with the female crest tipped in black. 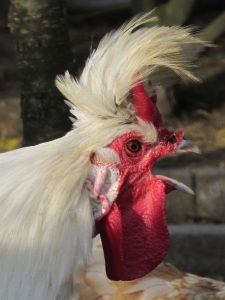 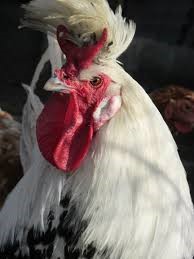 When you first get your chickens you should feed them growers mash, which is a refined form of chicken feed with a 19{cfcd481556a8b43fba6af451761032bd323e94372a0c1e607} protein content that gives them all the nutrients they need for their development.

When your chickens have reached 18 weeks gradually start feeding them growers mash or pellets. This contains on average 16{cfcd481556a8b43fba6af451761032bd323e94372a0c1e607} protein and gives them everything they need to support them with egg production.

Chickens eat between 2.9oz (40g) to 4.2oz (120g), but on average eat ¼ of a pound (113g) of feed a day. Start with this amount and adjust according to how much more or less you think your chickens need. You can base this on what they eat per day. You can either feed them morning and evening or leave a feeder there for them to eat throughout the day.

Moldy foods should definitely not be fed to your chickens as they carry bad bacteria that can cause serious health problems for chickens. In the UK feeding your chickens kitchen scraps is considered illegal as there is potential for disease contamination.

Chocolate and beans should also be avoided as they contain theobromine and phytohemagglutinin. This can be fatal for chickens once consumed. Check the surrounding area of your coop to. Make sure that there are no bean plants near to prevent your chickens foraging some beans.

The chicken coop needs to have at least 1.1m2 or 11 square feet of space, but not too much as too large a space is difficult for the chickens to generate enough heat to keep it warm. As Appenzeller Spitzhauben chicken’s prefer to have free range they need at least 250 square feet of outdoor space for them to exercise.

The coop should have a fence that goes both around and over it that is at least 8 inches deep into the ground, this should protect your chickens at night from predators once you have shut them into their coop.

As Appenzeller Spitzhauben chickens are good fliers you’ll need a sturdy an high fence around their roaming area. Chickens need constant access to water and it is best to find a water container that can’t be knocked over or stood in. They prefer cool water so if possible place the container out of the way of direct sunlight.

Your chickens should have access to grit as it is important in egg production, keep some always on hand for them. At night they each need a perch to sleep on and the hens need a wooden box filled with wood shavings in which they can lay their eggs.