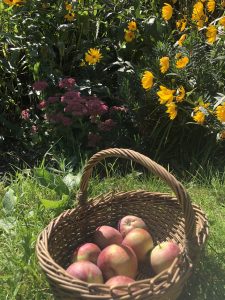 Apple cider vinegar has been widely touted for years by poultry enthusiasts as providing significant health benefits to chickens in particular.

On our farm we too have been adding raw, unfiltered organic apple cider vinegar to the chickens waterers for years. But it actually started with the goats.

The goats drink from a large open 10 gallon bowl which has always been accessible to the chickens as everything is free range (& organic) on our homestead.

What we noticed was the chickens would jump up on the side of the goats water bowl and regularly drink from it. 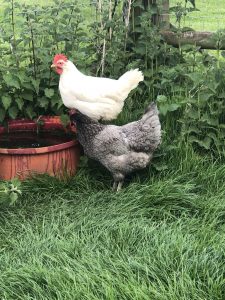 Now at first we tried to stop this (and failed) thinking there could be some kind of cross contamination of some sort, but as the years when by we realized all was well. So we researched it (no internet then!) and spoke to other poultry keepers and found they had been pondering the same issue.

Fast forward to today, we have been adding apple cider vinegar to the chickens water, and we now know such a simple ‘hack’ provides huge benefits to them. If its done properly that is. They now also have Kombucha and we leave apples from the orchard for them to feed on too, amongst pears and other soft fruits. 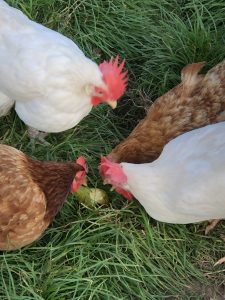 What is Apple Cider Vinegar and How is it Made?

Apple cider vinegar is made from fermented apples. Fermenting is a different process to pickling/canning which directly adds vinegar. Fermenting actually uses the sugar from the apples which turns into acetic acid. That acid is the main ingredient of vinegar, which is why the two are processes, fermenting and canning are often confused. Some yeast is also also added in too along the way.

Those cloudy bits at the bottom of a bottle floating around that look unsavory or yucky, shouldn’t put you off, infact they should encourage you. They are actually all the enzymes, which are amazing at boosting general health.

It’s also particularly good for chickens in times of stress, so think heat stress or cold stress. Plus it can boost the immune system as apples are naturally full of vitamins, minerals and trace elements.

Unlike pickling/canning which kills the microbes, apple cider vinegar contains good probiotics which is brilliant for aiding digestion and improving friendly gut bacteria.

The acetic acid will help normalize pH levels in the stomach and this does something amazing. It actually lowers the intestinal and fecal odor. In simple terms the poop doesn’t smell so bad, so why is this a benefit? Well a better smelling coop is a big bonus in my book!

Chickens are also sadly prone to respiratory issues. This is why I always recommend not allowing the chicken poop to build up in the coop. Chicken poop contains ammonia, which if levels are too high within the coop, can cause respiratory problems. 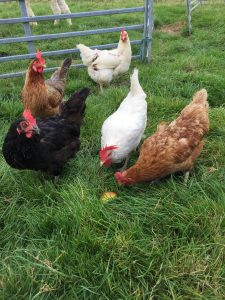 Apple cider vinegar assists detoxification of the blood and aids the removal of mucus from the body helping chickens clear their airways. Therefore providing a helping hand to any respiratory issues they may be experiencing.

My findings, along with other poultry enthusiasts, lean towards even more benefits including: 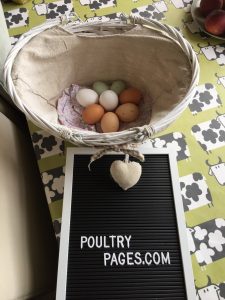 Is There Any Science to Back up These Findings?

There is very little, after a search of the internet directly relating to chickens. However a study conducted by J.A Bryd [published by Poultry Science in 2001] added various acids to water, so not just acetic acid found in apple cider vinegar, and it reduced the levels of salmonella and Campyolobacter in the chickens crop.

Whilst this is mainly a benefit for commercial slaughtering farms as lowering the bacteria levels within chickens is a benefit during processing as it would lower the chances of contamination. This is not really evidence that promotes it for backyard poultry usage.

As the acetic ingredient is acidic and excellent at killing bad bacteria it is also thought to possibly kill good bacteria too.

It has therefore been proposed that you should only add apple cider vinegar to your chickens waterer 1 or 2 weeks in 4. This point is left open for debate as most add just a small amount every time they top up the waterer.

About one tablespoon per gallon (4.5L). So for a 3 gallon waterer or drinker add 3 tablespoons or 1.5oz or 44ml, to be precise.

I add slightly more as we have a ‘larger’ flock of around 20 chickens. I think of it in terms of the amount of apple cider vinegar I want each chicken to try and consume, not in terms of the total dilution rate.

I used to use a vitamin supplement that I added to the water to help keep all the chickens healthy. But I’m now starting to find more and more ways to keep them healthy and actually boost their immune system with natural ingredients.

After all, the vitamins and nutrients found within bought supplements are derived from natural ingredients anyway.

I’m just cutting out the middle man and feeding it to them directly! 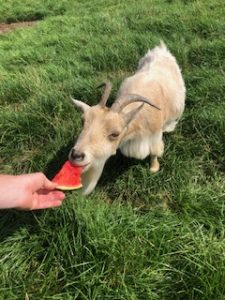 As well as adding in cider vinegar to the chickens drinker I also add garlic. Did that one surprise you? Garlic is an immune system high five!

It is also said to prevent sickness and infections, as it’s such a great natural antioxidant. Its also has antimicrobial properties but probably the best thing is the high levels of Sulphur. This makes it a perfect natural worming treatment and prevention method. The key ingredients in traditional worming tablets are Potassium Nitrate and Sulphur anyway so go ‘all natural’ the next time you worm your chickens!!

Start by adding a clove to the waterer. It works best in this style of waterer, as in any other it can clog it up, preventing water from coming out. 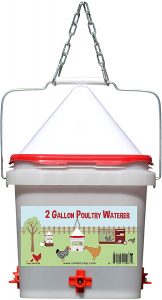 With this drinker the clove sinks to the bottom and its not disturbed as the drinking nipples are located above the bottom, meaning they are fed by water from above.

This is providing full scale goodness to all the flock. There is another reason why I only add it to a plastic drinker which I will cover further on.

Other Benefits of Apple Cider Vinegar

Helps stop the water freezing in the chickens waterer! Absolutely perfect if you have cold winters and suffer, as we used to, with freezing waterers. Nobody likes going outside 3 times a day to break the ice throughout winter. Vinegar has a freezing point lower than water at 28F (-2C), try it out for yourself!

What Else Can I Feed Chickens to Keep them Healthy?

Fruits are a great healthy snack for chickens. High content fruits are especially good during summer. When its really hot chickens won’t eat as much, but they will need to drink plenty!

Encourage them to eat high water content fruits like watermelon and apples. These are perfect to keep them happy and hydrated. Bananas also great, but not in high amounts, read our page on feeding bananas to chickens. 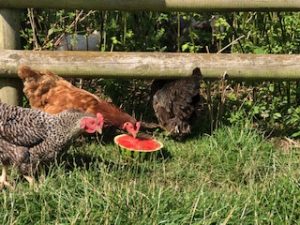 We also do our own fermenting to enjoy the benefits ourselves and the chickens share in that too. I ferment little cucumbers with garlic and onion, all totally organic and raw making them so nutritious. 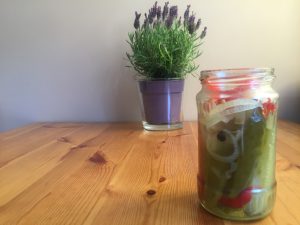 We leave them in the jar for a good few months [sometimes a year] before opening them and enjoying the amazing flavors. It’s a truly amazing process, I’m learning more and more and aim to keep you updated along the way. 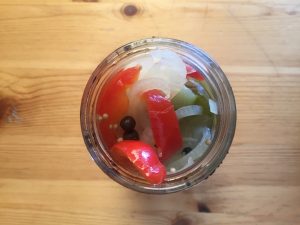 When we have eaten all the cucumbers I don’t throw away the remaining ‘water/brine’ I add little bits to the chickens water too. Infact everyone has some, the goats too, the alpacas the ducks the whole menagerie!

Hopefully we have some of the healthiest animals around, we sure do get some fantastic eggs. The proof really is in the pudding, as they say…

Can you make Apple Cider Vinegar yourself at home..?

Absolutely yes, here is one simple ‘how to’ video:

Dang; there had to be a downside didn’t there!

You have to have a plastic waterer, as the acidity of the vinegar will corrode a metal one. That corrosion will then contaminate the water.

If you already have a plastic waterer great – get going.

I don’t recommend a fount though, as a lot of water gets wasted meaning they aren’t getting all the goodness from the apple cider vinegar. Plus garlic can clog up and stop the amount of water coming out.

Don’t ever leave your chickens [or any animal] without water, they can suffer dire consequences from heat stroke within just a few hours on a hot day.

The best Apple Cider Vinegar is home made of course…but if you haven’t the time, this is the next best thing! 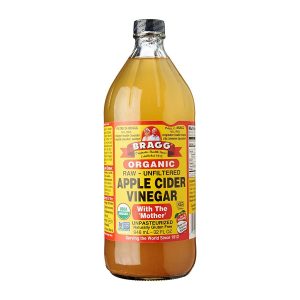 The Best Plastic Waterer for chickens, if you want to add either Apple Cider Vinegar or Garlic, is one like this…..