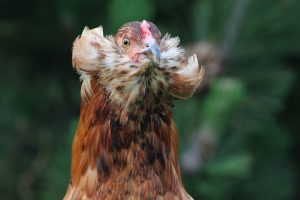 The Araucana Chickens was produced in South America by interbreeding Spanish Mediterranean breeds with the native breeds of South America. The Araucana Chickens originated from the province of Arauca in Chile, and there have been records of these birds since the 16th century. They were developed to make lavender and other colored birds in Scotland in the 1930’s by George Malcolm their original spelling being Aracuna. Other birds arrived via soldiers returning and according to the book ‘Stairway to the Breeds’ from a shipwreck in the Orkneys. The birds are unique in that the blue green coloring permeates the shell rather than having a white inner layer. The males weigh 6-7lbs (2.7kg to 3.2kg), females weigh 4.9-6lbs (2.2kg to 2.7kg) 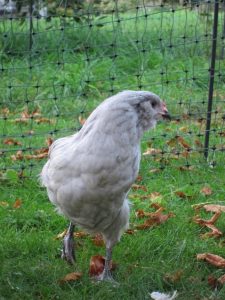 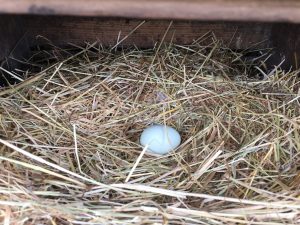 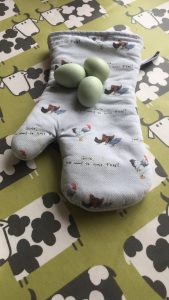 20-24 weeks and the hens will lay throughout winter

Make good mother hens and don’t mind being kept in a run and therefore are perfect for small backyard flocks. They are very friendly and the males are non-aggressive.

How do I tame Araucana chickens?

An absolute minimum of 2 chickens is required as they do not fare well on their own. It is suggested that you should have a minimum of 6 as chickens are social animals.

Each bird needs at least 11 square foot in the coop and an extra 10 square feet each in an outdoor run.

Yes, they should mix with other chickens just watch out that they are not being introduced into a large flock of similar looking birds that have multiple visible physical differences to the Araucana’s as they will be picked on.

The most popular colors are white, silver and lavender. They are distinguishable by their feathery tufts which grow out of their necks. Small comb and no wattle and they have a small crest on head Araucana chickens can be born without a tail.

There is a Rumpless variety of Araucana Chickens that have unique ‘ear tufts’ and lacks a ‘parsons nose’ hence the tail just falls down instead of being held aloft. 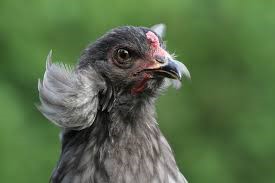 The recommended amount of food for your chicken a day is anywhere between 2.9oz (80g) and 4oz (120g), but most chickens tend to consume about ¼ of a pound (113g) of feed per day. You can feed them at meal time in the evening and morning or you can just leave feed in a feeder for them to enjoy throughout the whole day.

There are two main foods that chickens should not be given: chocolate or beans. Chocolate has theobromine in it which causes heart problems for chickens and can lead to fatalities. Raw beans contains phytohemagglutinin which also results in fatalities if consumed. Clear the area around your chicken coop of any bean plants to make sure there’s no potential for accidental ingestion. Food which has gone off and has started to grow mold should not be fed to chickens as the bacteria found in the food can cause health problems. The UK has made it illegal to feed leftovers from your kitchen to chickens in case of disease contamination.

You need a coop to keep your chickens in that has a space of at least 1.1 or 11 square foot per bird, don’t exceed this too much otherwise your chickens may have problems keeping the coop warm. On top of the coop space at least an extra 10 square feet is needed per chicken for an outdoor run. Araucana chickens don’t need lots of roaming space so don’t worry if you don’t have a big field for them to wander in. Their coop needs to have a fence sunk at least 8 inches into the ground that runs around the vicinity of the coop and over the top of it, this should keep predators out at night once you’ve shut your chickens in. Chickens should have access to water at all times and they prefer cool water so keep the container out of direct sunlight. Try and find a container that won’t get knocked over and that the chicken’s can’t step in. Grit should also always be accessible for your chickens as it helps them make eggs so make sure they have some near.

There is a Rumpless variety of Araucana Chickens that have unique ‘ear tufts’ and lacks a ‘parsons nose’ hence the tail just falls down instead of being held aloft.

Araucana can inherit the ‘lethal allele’ from their parents one such gene is the ear tuft gene which can have life long effects or cause death of the chicks whilst still in the eggs. This usually occurs around the 1-19th day of incubation. Breeders have bred out this allele gene with the blue egg laying Araucana that have been standardized. The blue egg layer would be my tip therefore if looking to keep this backyard chicken.