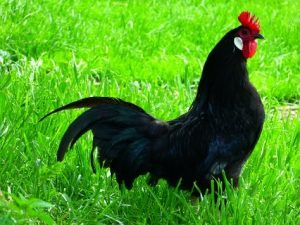 Augsberger chickens are extremely rare chickens from the Augsburg region of Germany. It is thought to have first been bred at the end of the nineteenth century with the intent of becoming a dual purpose chicken.

The breed originates from the French La Fleche chicken. It is the only native chicken breed to the Bavaria region of southern Germany and is prized for being a dual purpose chicken which is both a good egg layer and has good quality meat.

They do not make good backyard pets as they like to be free range. They are resourceful and can forage for their own food.

How do I tame “Augsberger” chickens?

The best way to tame a chicken is to handle it when it’s young so that it becomes used to human contact. If you’re buying older birds, ask the breeder if they’re used to humans. You can try feeding the chickens out of the palm of your hand.

For the bare minimum you need two chickens, but we would recommend six as the perfect small flock size.

They need a minimum of 10 square feet for a run, though we would recommend a lot more space than this.

Yes, these chickens are fairly friendly and should be ok when mixed with other chickens.

The Ausaberger Chickens is an all-black bird with an elongated cup shaped comb or two lines of spikes.

Their plumage is black with a greenish sheen throughout. The comb is similar to a Buttercup comb; although after the first couple points it should split into two ‘single’ combs. The result resembles a cup comb, but should consist of two separate blades touching each other the rear.

Their face, comb and wattles are bright red, and the ear lobes are smooth and white. Legs and feet are slate. They’re also available in white and as a bantam but rare both in the UK and Europe. 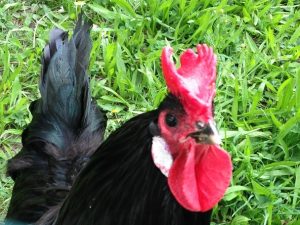 Once your chickens are 18 weeks old you should gradually introduce layers mash and pellets which has around 16{cfcd481556a8b43fba6af451761032bd323e94372a0c1e607} protein content and all the good stuff that helps them with egg production.

Chickens can consume anywhere between 2.9oz (80g) to 4.2oz (120g), but on average eat about ¼ of a pound (113g) a day. Feed your chickens ¼ of a pound a day and then change the amount depending on how much they eat. You can either feed them at breakfast and dinner or leave their feed in a feeder for them to eat during the day.

There are lots of things that chickens should not eat but the main two are beans and chocolates. Raw and dried beans have phytohemagglutinin in them which can kill your chickens. Similarly they theobromine in chocolate can cause cardiac arrest when consumed by chickens.

Food that has gone moldy should not be consumed by chickens as the bacteria in it can make them unwell. You’re legally not allowed to feed your chickens left overs from the kitchen in the UK as there is a potential for bacteria contamination.

These chickens need at least 1.1sqm/11.8sqft per bird in the coop, with a small perch for them to each sleep on in the night. They also need a nesting box which should be made out of wood and filled with wooden shavings. As these chickens prefer to be free range you need at least 250 square feet per bird of outdoor space for them to roam about in.

Their coop needs a fence  dug at a minimum 8 inches into the ground around its entire vicinity and over the top of it to keep them protected at night once you’ve closed them in. Grit needs to be close by so that the chickens can use it in the egg production process.

They also need constant access to water, they prefer their water to be on the cooler side so place the container in the shade. You should buy a container that can’t be knocked over or stepped into.