The Australorp Chickens came back into Britain in 1921 and remain a very docile utility bird, the main differences being a tighter / flatter feathering than the Orpingtons, as well as a longer body shape.

Australorps are famed for their egg laying abilities and for the majority of the 20th century held the world record for the most eggs laid in a year.

Australorp chicken are very gentle in nature and are easy to tame. They make for perfect backyard pets for families as they are one of the more child friendly breeds. They do also like to be allowed free range so can be kept either in a run or given a large space to roam.

How do I tame Black Australorp chickens? 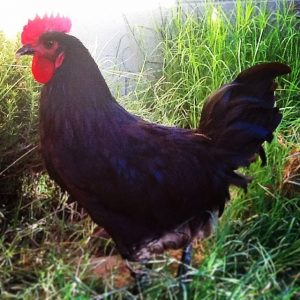 At an absolute minimum you need 2 chickens; however, 6 as a minimum would be better as chickens do better in groups.

Yes, they should mix with other chickens.

The Australorp Chickens is a medium weight, active bird laying a tinted egg and is a valuable bird for those who like eggs without sacrificing too much value in meat quality. They are a deep long bodied bird with a full breast, compact wings and very pronounced eyes within a clear unfeathered face. White soles to the feet and white toe nails, large and miniature available. Their black fluffy feathers make them hardy birds.

The Australorp Chickens is a medium weight, active bird laying a tinted egg and is a valuable bird for those who like eggs without sacrificing too much value in meat quality.