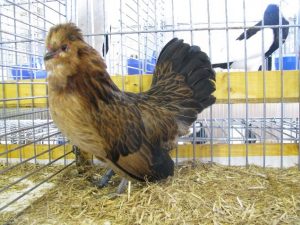 Barbu de Watermael is a breed of small ornamental bantam chickens originating in the Belgium town of  Watermael-Boitsfort. According to reports Antoine Dresse created the breed in the early nineteenth century. The breeds used to create the Barbu de Watermael are not known as Antoine Dresse kept this a secret, all he disclosed was that the Polish chicken had not been used to create this breed. This breed comes in a multitude of different colors but most famously black and reddish brown. In 2010 there was only a population of 764 and are considered endangered. The male birds of this breed weigh 600-700g and females weigh 450-550g.

These chickens are calm and friendly, however males can be aggressive during mating season, especially towards the females, so only get a male if you intend to breed the chickens.

How do I tame “Barbu de Watermael” chickens?

When you first get your chicks handle them frequently so that they become used to humans. If you’ve got your birds when they’ve already matured you should ask the previous owner as to whether they are used to humans. A great way to tame your birds is by feeding them out of the palm of your hand.

At an absolute minimum you should have two, but we recommend at least six as chickens are happiest in a group.

Barbu de Watermael chickens don’t mind confinement and can be kept in a run. The run needs to have at least 10 square feet per chicken, but it is better to give them more space than this.

Yes, these chickens are friendly and you shouldn’t have any problem integrating them.

The Barbu de Watermael has a rose comb and unfeathered legs. There are more than 30 recognized colors but the most popular colors of plumage are black and a reddish-brown. They have a narrow backwards facing crest, a unique rose comb and legs clean of feathers. 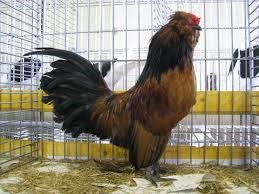 As bantam chickens are about 1/3rd of the size of average chickens you should feed them 1/3rd of the size of the average chicken’s recommended feed, which is about 1.4oz (40g). Start by giving them this amount and then adjust depending on how much they eat. You can either feed them at breakfast or dinner, but most people prefer to leave feed in the feeder for them to eat all day.

There is a whole range of things which you should not feed to chicken which you can find on our ‘feed’ page. The two most important foods not to feed your chicken is beans and chocolate.

Theobromine in chocolate can kill your chickens and similarly the phytohemagglutinin in raw and dried beans can cause fatalities.

Moldy food that contains harmful bacteria should not be ingested by chickens as the bacteria can make them very unwell. In the UK it is illegal to feed your chickens kitchen scraps for this reason.

You will need a coop that should have around 1.1 per chicken and a perch that they can sleep on at night. The coop should have wire fencing all around and above it which should be sunk 8 inches deep into the ground; this will protect your chickens once you have shut them in for the evening.

Wooden nesting boxes are needed for your hens to lay eggs in, you can fill these with wood shavings. Your run needs at least 10 square feet per chicken but we recommend at least 25.

There needs to be grit accessible to your chickens so that they can use it to make eggs. Water needs to also be readily available, they don’t like hot water so keep it in the shade away from the sun’s rays. Try and buy a water container that can’t be stepped in to or pushed over.