The Barnevelder chicken originates in the Barneveld region of the Netherlands. The breed was created by cross breeding chickens native to that region with chicken breeds found in Asia. It is thought that these birds were also cross bred with American utility birds and British Orpingtons in the early 20th century.

In 1921 a breeders association for the Barnevelder chicken was set up and they were imported to England as brown eggs were in high demand at the time. The breed was too variable to be recognized until 1923, which was around the time that breeders attempted to make consistent characteristics amongst the breed. Male Barnevelders weigh 7lbs (3.2kg) and female ones weigh 6lbs  (2.75kg).

From a unique Dark Brown eggs with a coppery tinge, (often confused with Copper Maran eggs), to a Light Cream

From 6 months they also lay through winter

These chickens are really friendly and low maintenance. They’re lively and active but can still make a good backyard flock. They’re especially great if you have kids as they’re gentle birds and tend to be non-aggressive. 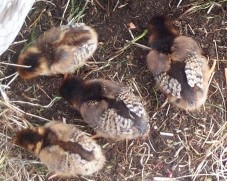 How do I tame “Barnevelder” chickens?

At an absolute minimum you should have 2 birds, as chickens do not fare well by themselves. We recommend that you should have more than this, 6 is an ideal small flock number.

Yes, these are gentle and friendly chickens so should mix well.

The Barnevelder Chickens is alert and upright with the appearance in profile of a concave back line. They are large birds that have brown plumage with double black lacing and plain black feathers down their necks. They have a lovely iridescent color. Their wings are placed highly on their body which means that they’re poor fliers. They have a dark beak, dark amber eyes and a single comb. Their legs are bright yellow and clean of feathers. 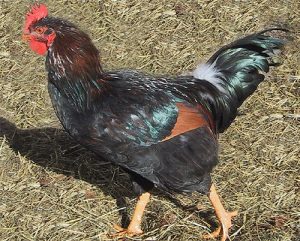 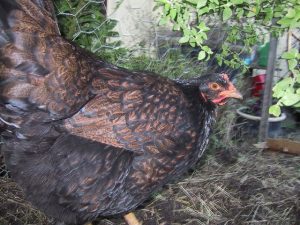 When you first get you chicks they need to be fed growers mash which is a smaller version of chicken feed which has 19{cfcd481556a8b43fba6af451761032bd323e94372a0c1e607} protein and all the nutritious components they need to help them grow big and strong. Once they reach 6 weeks you can exchange this for chicken pellets, which is just chicken feed in pellet form. Chicken pellets typically have 15-16{cfcd481556a8b43fba6af451761032bd323e94372a0c1e607} protein. Gradually switch chicken pellets for either layers pellets or layers mash when your chickens reach 18 weeks. Layers pellets and layers mash contain all the vitamins and minerals your chickens need to aid them with egg production.

Chickens typically eat between 2.9oz (80g) and 4.2oz (120g) every day, but on average eat a ¼ pound (113g) of chicken feed a day. Try feeding them this and then adjust according to how much they eat. You can either feed them morning or evening or put food into a feeder that they can enjoy throughout the day.

There are lots of foods that you should avoid giving your chicken, but the two main foods are chocolate and beans. The theobromine in chocolate is fatal for chickens as it triggers heart problems. Similarly the phytohemagglutinin in raw and dried beans also results in fatalities when ingested.

In the UK it is illegal to feed your chickens leftovers from your kitchen as there is potential for disease contamination. Moldy foods should also not be ingested by chickens as the bacteria in the mold can make them unwell.

You need a chicken coop which has at least 1.1sqm or 11 square feet per chicken. The coop needs a perch for each of the birds to sleep on at night as well as nesting boxes for the hens made out of wood and filled with wood shavings. If you’re keeping your chickens in a run you need a minimum of 25 square feet per chicken, though we recommend much more than this.

You’ll need a fence set at least 8 inches into the ground running around the entirety of the coop and over the top of it to protect your chickens from predators once you have shut them in for the night. Water needs to be on hand at all times for your chickens, they like cold water so try and keep the water container in a shady spot. The best water containers are those which can’t be tipped over or stepped into.

If you live in a warm climate make sure the run and coop are in a shaded area as these chickens don’t fare well in extreme heat. Finally, grit should always be near the chickens so they can take as much as they need to help with egg laying.