The Bearded d’Anvers chicken, otherwise known as Barbu d’Anvers, is a bantam breed from Belgium. In America they are also called Millefleur or Millies.

The breed was first recorded in 1858, making it one of the oldest bantam breeds to exist. Their ancestry has not been well documented but it is thought that this breed derived from small chickens that were found in the Belgium and the Netherlands.

The Bearded d’Anvers is the only Belgium bantam breed that is not considered to face the threat of extinction, a census in 2005 counted around 1500 birds of this breed. These bantam chickens are bred for ornamental purposes as do not have a standard sized counterpart.

Once full grown, the males weigh 700g and the females weigh slightly less at 600g.

Bearded d’Anvers Temperament / Are they good as pets?

The hens are known to be very friendly and especially good with kids; the roosters can be aggressive so watch your kids around them. They are considered the best starter chickens and are fairly low maintenance.

How do I tame them?

These chickens are renowned for being very calm and friendly so should be easy to tame. When you first get you chicks when they’re still young you should try and handle them to tame them. If you’ve got your birds when they’re older, try feeding them out of your hand to get them used to human contact.

At an absolute minimum 2 chickens should be kept together, though the perfect number for a small sized flock would be 6 chickens.

They can be kept either free range or in a run, if you’ve chosen to keep them in a run they need at least 25 square feet per bird.

These chickens can either be kept in a run or be free range, they will live for longer if given lots of space to roam but don’t particularly mind confinement.

The hens are friendly and should mix with your other chickens. The roosters may try and dominate the flock and could be aggressive towards other birds.

There are fourteen recognized varieties of plumage for the Bearded d’Anvers chicken, with the most popular being a light brown color. They have a small rose comb and dark legs which are clean of any feathers.

Their wattles are either small or non-existent. It has a large breast which looks almost puffed out and have a tail which arcs up. Their ears are covered by feathers. 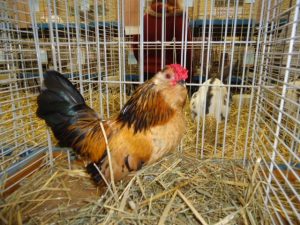 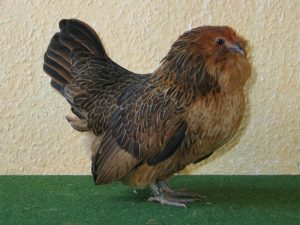 Once they have reached 6 weeks they should be big enough to be able to properly digest chicken pellets, which is a pelletized form of chicken feed containing 15-16{cfcd481556a8b43fba6af451761032bd323e94372a0c1e607} protein. Specialized bantam pellets are available specifically for bantam breeds.

Bantam chickens require a lot less feed than standard sized chickens as they are around 1/3rd of the size. Try feeding them around 2oz (60g) at first and then adjust according to how much they eat.

You can leave a large amount of feed in a feeder for them to nibble on during the day or you can feed them when you have breakfast and dinner.

There is a whole range of things that are best not to be consumed by chickens but the most important foods to keep far away from them are chocolate and beans.

There is theobromine in chocolate that causes and heart problems and can kill your chickens Dried and raw beans have phytohemagglutinin in it which causes similar problems. In the UK the government has made it illegal to feed your chickens kitchen scraps as there could be contamination of illnesses.

Food that has grown mold shouldn’t be given to chickens as the bad bacteria can make them sick.

The most important piece of equipment you need is a coop for housing your chickens. For an average sized chicken you should have at least 1.1m2 or 10 square feet per chicken, but as these are bantams you should have about 2/3rds of this space.

For free range chickens you need around 250 square feet per bird, but much more is suggested. If you want to keep your chickens in a run then you should have 25 square feet per bird. Their coop needs to have a perch for each chicken which they can sleep on at night; the hens also need wooden boxes filled with wood shavings that they can lay their eggs in.

The coop should have a fence over and around the coop to keep them safe from predators at night. Grit and water should always be accessible to chickens so make sure they always have access to some.

Keep your water container out of direct sunlight as they don’t like warm water, try ad find one they can’t knock over or stand in.

Most Bearded D’Anvers live longer and healthier if kept free-range or in an open space with no crowding. 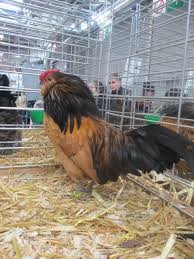