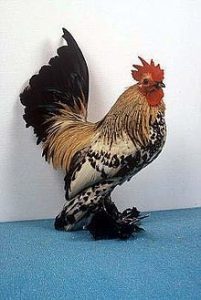 Booted Chickens, also known as the Sapelboot, are a rare and ancient bantam breed kept mostly in the Netherlands, with a few breeders in the UK. It is though that their existence has been recorded as early as the 16th century.

This breed is related to the Bearded d’Uccle, the main differences being that the booted chicken is much taller and does not have the famed d’Uccle feathery beard.

Booted Chickens are usually kept for ornamental purposes rather than as a utility chicken. They were officially recognized by the American Poultry Association (APA) in 1878, after being first imported to America a few years before. 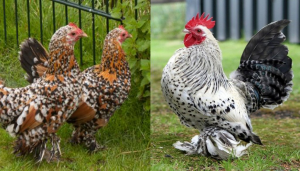 From 6 months (so considered later than many other breeds)

These bantams are really friendly and are great for those with kids looking to get a flock.

How do I tame “Booted Chicken” chickens?

Older birds can be tamed by feeding them out of your hand. If you have young chicks you can handle them and pick them up in order to tame them.

At least 2 chickens, 6 would be ideal for a small chicken coop.

They love to forage so they would appreciate being given some space; however, most breeders keep these chickens in a run, which should have 25 square feet per chicken.

Booted exhibit extremely developed characteristics, such as vulture hocks, extreme foot feathering or boots, and very erect, well spread tails with prominent breast carried high. They have red wattles and earlobes and have a five pointed single comb. There are lots of different colors this breed comes in from lavender to lemon, the most common is Millefleur. 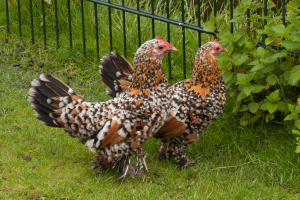 Bantam chickens require less than a standard size chicken so start with 2oz (60g) and adjust accordingly. You can leave the feed there for them to eat when they feel like it or give them it at breakfast.

Moldy foods shouldn’t be given to chickens as they’ll become very sick. For similar reasons, feeding old food from your kitchen is illegal in the UK.

Chocolate should not be given to chickens as it has theobromine which is toxic. The phytohemagglutinin in beans is poisonous and will lead to fatalities once consumed.

Make sure that you have a fence that goes around and over the coop so that they’re safe from any predators. Make sure that there is always water for your chickens, which should be kept in the shade as they won’t drink warm water.

Buy a container which they can’t tip over or get into to stop your water from becoming dirty. Grit is essential in the egg production process so make sure they have some close by to help themselves to at any point.