The Brahma chicken is named after the Brahmaputra river in India, despite having been developed in the United States. An Asiatic breed of fowl, also known as Chittagongs, Gray Shanghais, and Brahma Pootras, later shortened to Brahma, thought to have been a cross of the Malay and Cochin in India.

Imported from Shanghai, China, in the early 1840’s, they landed in New England much later. They were first imported into New York in 1846 and stock first reached England in 1853, where they caused a great stir. Brahma Chickens were included in the first book of poultry standards issued in 1865.

The name was shortened to Brahma in 1852 when a small flock was given to Queen Victoria. Fully grown, males can weigh up to 12lbs (5.5kg) and females can weigh 10lbs (4.5kg). The Brahma is a rather large and heavy bird. 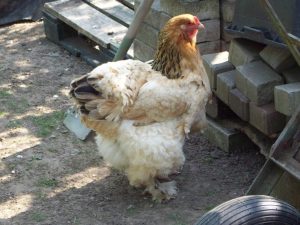 These chickens are calm birds and are usually non-aggressive so make for great pets.

How do I tame “Bearded d’Uccle” chickens?

The best way to tame a chicken is to handle it when it is still young, this gets your chickens used to people. If you have older chickens that need taming, try feeding them out of your hand.

2 chickens is the absolute minimum you need for a flock, we recommend around 6 as a small flock number.

They can tolerate confinement fairly well so you need around 25 square feet per chicken in their run.

Yes, they’re non-aggressive and should mix well with your other chickens.

There are three recognized varieties of the Brahama: light, dark and buff.

The light Brahma has white plumage, the saddle feathers are mixed with black and they have black tail feathers.

The buff Brahma has a similar appearance but has a golden plumage instead of a white one.

The dark Brahma is either a dark amber with the hen having grey and black saddle feathers and the cock having white and black ones.

The head and skull are important breed characteristics. Texture of the feathers is also of great importance, for the plumage, should be smooth fitting and not loose-feathered and soft as in the Cochin. 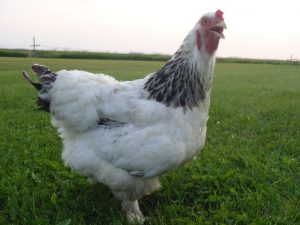 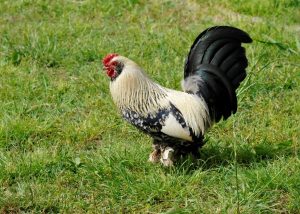 Chickens eat anywhere between 2.9 oz (80g) and 4.2oz (120g) a day, but on average breeders feed their chickens ¼ of a pound (113g). Start by feeding them this and then adjust the weight of feed around how much they consume. You can leave the feed in a feeder for them to eat whenever they please or you can give them set meal times. 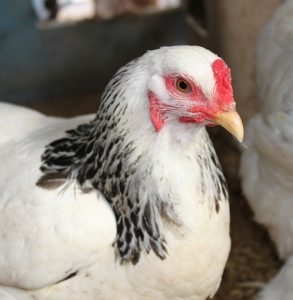 You should invest in a sunken fence to go over and around the coop to keep them safe at night. Find a water bowl which they can’t stand in or push over and place it in the shade so the water doesn’t get too warm.

Your chickens need grit to help with egg production so make sure there is always some that they have access to.