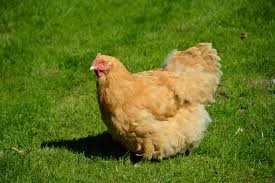 The first records of the Cochin Chicken in the UK date back to the 1830’s / 40’s, when early imports were presented to Queen Victoria this breed was known as Shanghai’s.

The Chinese Shanghai fowl came to America in 1845 and was first admitted to the American Poultry Association (APA) in 1874.

The name of this Asiatic breed was later changed to Cochin. The earliest Cochins were more or less buff in color. Its striking appearance, due to great size and profuse soft feathering, distinguished it from all other known breeds at the time.

Cochins created a sensation in England, resulting in a great boom for the ‘Cochin China’, as it was called in the days of the ‘Cochin craze’.

This breed massively contributed to the rise in popularity in keeping chickens and having them as backyard pets. 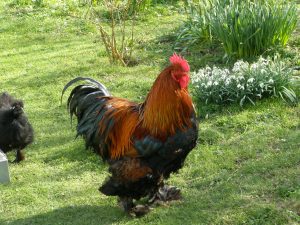 How do I tame Cochin hens?

Taming chickens is best done when they’re younger, pick them up and hold them to get them used to human contact. If you’ve got older chickens you want to tame, feed them from your hand.

2 chickens is the smallest number you should buy, but its best to have a small flock of at least 6.

This breed is remarkably lazy and don’t need lots of land to roam as they prefer confinement.

Yes they should mix, they’re non-aggressive so shouldn’t cause any problems. 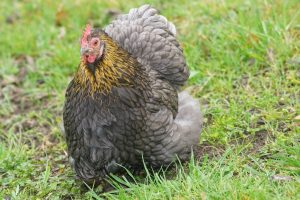 These are impressively large birds and are rather round in appearance due to being heavier than most breeds.

They are distinctive due to their excessive plumage which covers all of their body, even their feet!

They have a single comb and yellow skin.

A Blue Cochin Chicken has blue shank and outer toes! They are very difficult to breed and two blue cochins wont breed offspring with a true blue color! A blue cochin is shown in the photo below: 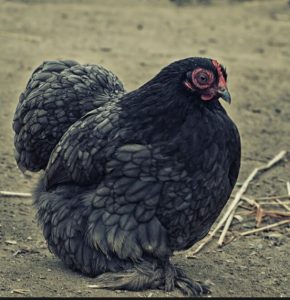 Bantam version exist of the large Cochin chicken. These bantams in the UK are largely referred to as Pekins. The bantams have the same great characteristics as the large version. They are so so friendly, and will give great cuddles! Plus they are great mothers, and will nurture and look after chicks amazingly well. 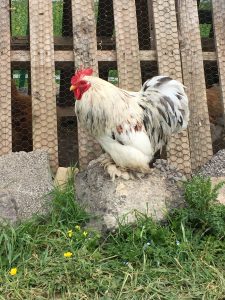 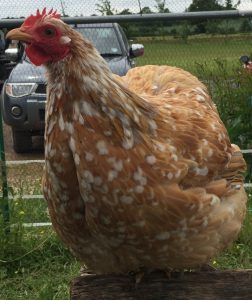 Image above: these are our gorgeous Cochin Bantams

Being smaller than the standard (large) Cochin they will eat less and typically consume 2oz of feed per day. They aren’t the best foragers so wont supplement much more within their diet from this.

A bantam female will weigh 26oz whereas a bantam cockerel will weigh 30oz.

Caring for Cochin Chickens during Summer

With all those feathers and fluff its hardly surprising they aren’t a hot weather bird. With the following suggestions i’ve found our Cochins are much better equipt for hot weather and so should yours with this advice.

Ill start with the females are they are more stressed by heat than the males. So I make sure the females have access to the ground. I have fairly sandy soil, in the coop especially, where its repeatably walked over and loosen by the birds on a day to day basis. This is great as the Cochins like to dig down and cool of in the soil.

If you have a grass in the run/pen/coop then make sure its cut short. Having short grass will reduce the bugs and mites in the grass that can get onto the feathered part of the toes, and cause irritation.

Most of the time they will remain in the barn where its cooler and shaded, but have free rein to go where they like to suit them. Sometimes the barn and the coop can get very stuffy if its humid too. In extreme heat fans could be provided to cooler the area and birds down. Make sure they have shade, somewhere within their vicinity. Out of direct sunlight in the shade and with a cool breeze with access to the floor they will cool off happily.

Access to fresh cold drinking water changed several times a day if required in extreme heat, obviously point but one that cant be repeated enough. Having a male running round will also compumd the stresss in the heat if he is chasing after the hens etc. Remove the male if this causing heat stress to the females.

I reduce the corn i feed them as my feed being on a farm is quite corn heavy. I supplement with garden greens and veggies. Mine love cucumbers, and go crazy for tomatoes. These are lighter than corn and contain alot of water so aid the cooling process.

Cochins build up alot of manure on the feather near the vent. This, in hot weather will draw flies and then maggots. This can happen in a sometimes just a day. Good ventilation will help reduce flies etc.

What to look out for – females that stand awkwardly and droop their tails.

What to do – wash this area by hand and everything will be fine.

You can as previously discussed remove the males, i do this so they aren’t showing off and using up energy and getting hot themselves and chasing the females round upsetting them in the heat. Males that don’t have access to the floor and cant access the soil to cool off seem to do ok. Other than that feed and water the same as you would the females.

It’s likely that they’ll eat more than this considering they are one of the bigger breeds. You can feed them either during meal times or just leave feed for them to eat whenever they want.

There are lots of things that chickens shouldn’t eat, the two most important being chocolate and beans.

Chocolate has theobromine in it and beans contain phytohemagglutinin, both of these things can cause serious health problems in chickens and can lead to death.

Food that has gone moldy also shouldn’t be fed to chickens as it has bad bacteria that can make them unwell. For this reason in the UK feeding chickens leftovers is considered illegal.

The vegetation in their run should only be short grass as anything longer will ruin get caught in the feathers on their legs. The coop should have a perch for each of the chickens to stand on whilst they sleep and should have wooden laying boxes.

The coop needs to have a sunken fence all the way around the coop and over the top so that when you shut your chickens in at night they are safe from any predators.

Your chickens need a water container that can’t be knocked or stood in to, place it away from sunlight as chickens don’t like warm water.

Grit should also be accessible at all times so make sure you have some close to hand. 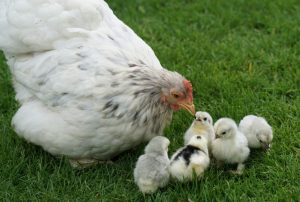