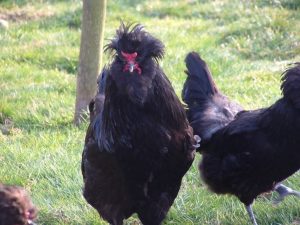 Crevecoeur Chickens are an old French breed who are related to the Houdan but have one less toe and a slightly different comb. Little is known of the origin of this breed, but it is thought that it has existed since the 18th century and was developed as a dual purpose bird.

Darwin classifies Crevecoeur Chicken with Houdans as sub-varieties of the Polish. They originated in Normandy and took their name from a village in that country.

The breed was classified as endangered in 2007, and a 1995 census of the breed estimated the population to be as little as 100 birds.

The Crevecoeur chickens are somewhat friendly and have

How do I tame “Crevecouer” chickens?

The best way to tame chickens is to hold them when they are still young as this will help get them used to humans. For older chickens, try putting feed in your hand and letting them eat out of it.

You need to buy at least 2 chickens, however 6 would be a good small flock size.

Yes, they should mix well with other chickens.

Very similar in appearance to the Houdan, only they have one less toe and a V-shaped comb. They have four recognized plumage colors: black, blue, white and cuckoo, with black being the most popular. Their legs are blue with a gray undertone. However they were and are predominately black in the US. However in 2017 blue, white and splash varieties where imported into the US from France. 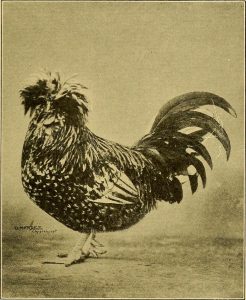 Most people like to leave the feed there for the chickens to eat when they please but if you prefer you can feed them during meal times.

In fact, in the UK it is banned and illegal to feed your chickens leftovers from the kitchen.

The most important piece of equipment you need to keep chickens is a coop. The coop should have 1.1m2 or 11 square feet per chicken. Inside the coop you need a perch for each of the chickens to sleep on at night.

There should be wooden laying boxes as well which should have wooden shavings in them for the birds to lay their eggs in. The run needs to be 25 square feet per bird and if you would like to keep them free range then you should have at least 250 square feet per chicken.

The coop needs a sunken fence around the perimeter and over the top of it to keep your chickens safe from predators. Your water container needs to be untippable and high enough that they can’t stand in it, make sure you place it away from direct sunlight.

Make sure that there is grit always on hand for your chickens as they need this to help them make eggs.