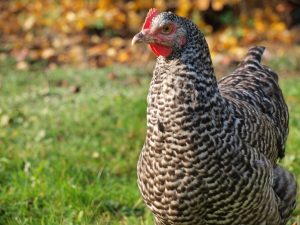 The Dominique chicken is an old American breed that was especially popular during the colonial period and is thought to have originated in Quebec.

The name comes from the former French colony of Haiti, which used to be called Saint-Dominique, as chickens from this region are thought to have played a part in its creation.

They are a dual purpose and hardy hen, they used to be able to survive by just foraging their own food!

For the most of the 19th and 20th centuries this breed was considered close to extinction, but due to a rise in popularity of rare breeds the population picked up again after the 1970s.

We have a whole unique page dedicated to this question click here for 5 easy ways to tell them apart!

They’re gentle and good-natured, they do very well as pets. Also as they are so easy going they are easy to show.

How do I tame Dominique chickens?

Picking up your chickens when they’ll still young is a good way to tame them, however, don’t do it too often as this breed isn’t particularly fond of being held. If you have bought birds which are mature then you can tame them by having them eat out of your hand.

For a small sized flock 6 would be a good number, but if you don’t have the space for this you should have a minimum of 2.

This breed is a forager, so prefers to have lots of space. So you need at least 250 square feet per chicken.

They should mix with other chickens as they are gentle and hopefully should not cause any trouble.

This breed has a distinctive appearance, with a dark gray and white striped plumage. They have a rose comb and yellow legs and skin.

The two main differences between the Barred Rock, which has a similar look, and the Dominique is that the Barred Rock has a rose comb and also black striped feathers rather than gray. They have red eyes and earlobes, as well as a small yellow beak. 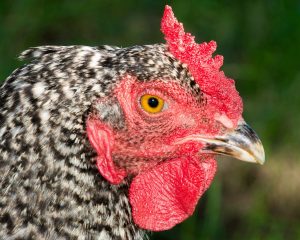 The dominique chickens barred pattern feathering is referred to as ‘hawk colouring’ and offers the breed some protection from aerial predators.

You can leave the feed there for them to eat all day or you can feed them morning and evening.

The top two things that chickens can’t eat are chocolate and beans. They contain theobromine and phytohemagglutinin which are toxic and can cause fatalities if ingested.

Moldy food should not be given to chickens as they can harbor bad bacteria which can make them sick. In Great Britain feeding your chickens leftovers is banned.

A coop is the most important thing you need in order to keep chickens. The coop should have 1.1m2 or 11 square feet per chicken and a perch for each of the chickens to sleep on at night. There needs to be wooden laying boxes for them to lay their eggs in.

There should be a sunken fence going all the way round and over the top of the coop. They need to have access to land to roam and forage in, there should be at least 250 square feet per chicken.

Your chickens need to have access to clean water which should be in a sturdy container that is placed in a shaded area as chickens don’t like warm water.

Grit should also be always accessible especially when your hens are getting ready to lay as they need grit to produce eggs.