The Dorking Chicken is one of the oldest pure British breeds and is named after the southern county of Dorking. A Roman writer described birds with five toes of the Dorking Chicken type at the time of the invasion by Julius Caesar.

Despite having a British name, the Dorking is thought to have originated from Italy as there are accounts from a Roman farmer called Columella from as far back as 4 AD. Columella spoke of large, broad-breasted hens that were square framed with large heads and has small upright combs. He also stated that the purer breeds were five clawed.

One of the only breeds with red earlobes that produce white eggs. They featured in the first Poultry show in 1845 and were used to create the Light Sussex and Faverolles as well as other breeds, they were used to produce excellent table birds.

From 6 months but can take up to 2 years.

They are quiet and generally calm, they need space to forage so wouldn’t make good backyard pets. They also don’t scratch much meaning they are great for your backyard/garden if you want to keep them free range. 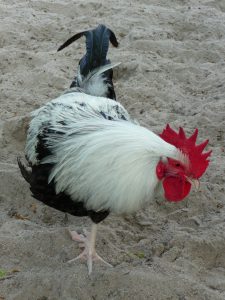 How do I tame Dorking chickens?

When they first hatch, try holding them so they get used to human contact. If you have bought older chickens you can tame them by putting feed in the palm of your hand and letting them eat out of it.

At an absolute minimum you need 2 chickens as they get lonely by themselves, an ideal small flock number would be 6. 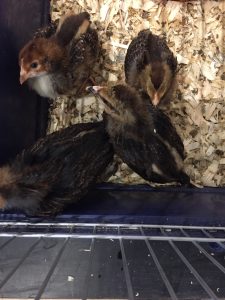 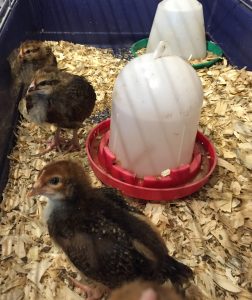 The Dorking chicken needs lots of space as they don’t like being confined. You should have at least 250 square feet per chicken.

They should mix well with any other chickens.

There are five standard colors of plumage for this breed: red, silver, white, brown and cuckoo, the silver is the most popular. They can have either a single or a rose comb and have a yellow beak streaked with a light pink. They have a large red wattle and well developed red earlobes.

Male comb: 6 even points standing upright, the middle two are the longest.

Female comb: they have a medium sized comb with 6 distinct points the comb falls to one side as shown in the picture below. 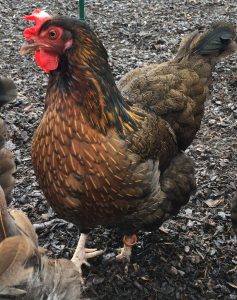 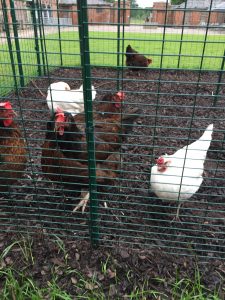 You can either feed your chickens after meals or just place feed in the feeder for them to have when they want.

There are lots of things that chickens should not have. The theobromine in chocolate and the phytohemagglutinin in beans are toxic to chickens and therefore they should be kept far away from them.

Food that has gone off (i.e rotten) shouldn’t be given to chickens as they contain nasty bacteria that can make them unwell. In the UK you can’t feed your chickens kitchen scraps as it is illegal.

A coop is the main piece of equipment you’ll need for your chickens. The coop should be 1.1m2 or 11 square feet per bird. The coop should have a perch for each of them to nap on at night and some laying boxes for them to lay eggs in, these should be wooden.

You should have a fence that goes around and over the coop to keep your chickens safe once you shut them in for the night. They need at least 250 square feet per chicken extra to roam around in the day. They need access to water at all times, the water container should be tall enough that they can’t step into and sturdy enough they can’t knock it over.

Place the water away from sunlight as the chickens prefer cooler water. There should be grit for the chickens to use as they please, especially when they reach laying age as it helps them produce eggs.