The Dutch chicken bantam, otherwise known as the Hollandse Kriel, is a rare breed of chicken that is thought to have actually originated in Asia. The first record of their existence dates back to the end of the 19th century and it is believed that they were bred because they laid small eggs. This was desirable as peasants were allowed to keep small eggs for themselves, whereas any large eggs had to be sent off to the rich gentry.

The Dutch chicken first came to America and the United Kingdom in the mid-20th century and was first recognized by the American Poultry Association (APA) in 1992. 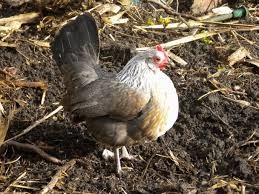 They’re friendly and would be good pets.

How do I tame “Dutch Bantam” chickens?

Holding your chicks when they’re young is one of the easiest ways to tame them. If you have mature chickens of don’t want to pick up your chicks then you can put some feed into your hand and have them eat out of it.

Chickens do better in groups, 6 would be an ideal small flock size but if you don’t have the space for 6 then we recommend an absolute minimum of 2.

They’re very active so need a lot of space. It is best to have at least 250 square feet per chicken outside of the coop for them to exercise.

Yes, they should mix with your other chickens as they are friendly, they’re best mixed with other bantams as they may be bullied if integrated with only standard sized chickens

This breed is one of the smallest bantam breeds but they have impressively large wings considering their size. There are 13 recognized colors of plumage in the UK and 29 in Holland. The first standardized color was partridge. They have white earlobes and a 5 pointed single comb. They have white skin and blue/gray feet and legs.

Growers mash should be fed to your chicks until they are 6 weeks old. Growers mash has around 19 percent protein and all the nutrients in them that they’ll need in order to grow.

Once they’ve hit 6 weeks they should be fed chicken pellets, which is just your typical chicken feed which has been pressed to form pellets and has 15-16 percent protein.

At 18 weeks you should introduce layers mash or layers pellets bit by bit; this has around 16 percent protein and contains vitamins and minerals which will help them with egg production.

Typically chickens eat ¼ of a pound (113g) a day, but the Dutch chicken is a bantam breed so needs a lot less than this. Start by feeding them 2oz (60g) of chicken feed a day each and then change the amount based off how much of or how quickly your chickens eat this.

The two things that should definitely not be consumed by chickens are chocolate and beans. Beans, especially when they are raw or dried, can kill your chickens if they ingest this as it contains phytohemagglutinin. The theobromine in chocolate can cause your chickens to go into cardiac arrest if they eat it.

Moldy food and any food that has gone rotten will often make your chickens sick if they are fed this as it will have grown bad bacteria inside of it. In the UK it is actually illegal to feed your chickens food from your kitchen.

What do I need to keep Dutch chickens?

The first item you need to get for your chickens is a coop, which should have 11 square feet inside per chicken. The coop also needs perches for every bird so that they can sleep on them at night. You should also find them some wooden laying boxes for your girls to lay their eggs in.

To keep your chickens safe you should get a wire fence around the perimeter of the coop and over the top of it which you can sink into the ground to prevent predators from digging underneath it. As this breed prefers to be kept free range you need an extra 250 square feet of space per chicken outside of the coop for them to stretch their legs.

Chickens need access to water at all times, make sure you have a container which can’t be kicked over or stepped into. There should always be grit accessible to your chickens too as this is a key ingredient in the egg making process.