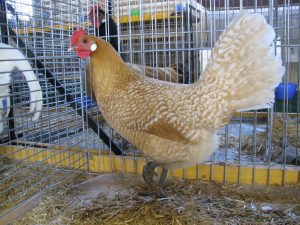 Friesian Chickens are one of the oldest Dutch breeds originating on the northern coastal area of Friesian in Holland well over a century ago. The large version of this breed often get mistaken for bantams as they are so small. The bantam version is in fact the same size as a Dutch bantam. They are at least thirteen colors in Europe.

Many old books mention that the Friesian chickens were brought over to England and used in the production of the Gold Hamburghs, which were then used to produce the Pheasant Fowl. However, its also reported that the Friesian was only just brought to the UK 40 years ago, so its very hard to say for absolute certainty.

How do I tame Friesian chickens?

The easiest way to tame chickens is to pick them up when they’re young so that they become used to humans. Or, if you prefer, you can get them to eat out of your hand by giving them treats of chicken feed.

You should have an absolute minimum of 2, but the more the better.

They’re active birds who love foraging so they need lots of space. You should have at least 250 square feet per chicken of extra space outside of the coop.

Yes, this breed is not known to cause any problems and should integrate well, as long as they’re not over crowded.

The Friesian chicken has white skin, legs and a red single comb. Their eyes are a dark orange that are large in size.

They have a small body with a tail that points up at a 45 degree angle. There are a total of 15 different color varieties across the world; however, in the UK there are only three recognized color varieties: chamois-penciled, gold-penciled and silver penciled.

The chamois variety is viewed as the most attractive, despite being the rarest of the color varieties. 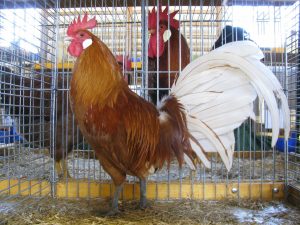 Chickens typically eat around ¼ of a pound of feed (113g) a day each. However, they’re a small breed so don’t require this much. Start by feeding them a little bit less than this and change the weight based off how much they eat. Be careful not to overfeed them.

The most important things that you should not feed chickens are chocolate and beans. Beans contain phytohemagglutinin and chocolate has theobromine, these are both lethal to chickens or at the very least can make them seriously unwell.

As this breed of chicken particularly enjoys foraging, make sure that you remove any bean plants near the coop as to make sure that they do not get ahold of any.

Food that gone off and has grown mold shouldn’t be given to chickens to eat as this can make them very sick.

You should have a coop which needs around 11 square feet per chicken and a perch inside for each of them to sleep on at night. You also need laying boxes when they approach laying age, these should be wooden and filled with wood shavings.

To keep all your chickens safe at night you should place wire fencing over and around the coop to keep out predators. It is advised that you sink the fencing into the ground to stop predators from digging under the fence. As this breed loves to be active you need at least 250 square feet per bird of exercising space.

There should always be water which they have access too as well as grit. The water container should be fairly sturdy so that they can’t tip it over.