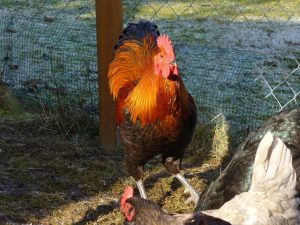 The first import of German Langshan Chickens was made by Major Croad from various Asiatic stock. In 1904 a Croad Langshan Club was formed to develop the bird and now differs from the Modern or German Langshan.

The German were imported into Germany from England in 1879 where they were selected for the clean legged form. They had black Minorca added for egg capacity and this altered their form to a more upright stance.

The Black Langshan originated in Northern China, where it has been bred over a long period of years.

German Langshan chickens are good pets as they are easy to tame and especially calm. That being said, it is always best to keep a close eye on young children around chickens as they can still act out.

How do I tame German Langshan chickens?

The most successful method of taming chickens is to pick them up whilst they are still chicks in order to get them used to human contact.

If you have older chickens you should try and feed them directly out of your hand to tame them instead. Use treats – who doesn’t love treats!

If you have bought older chickens make sure to ask whether they are tamed before you buy them.

You should have at least 2 chickens, but the more the better as chickens get lonely.

If possible, it is best to keep this breed free range. This means you need 250 square feet or more per chicken.

They should mix with your other chickens; however, as they are rather large chickens care needs to be taken when integrating with chickens that are considerably smaller.

German Langshan Chickens are dual purpose fowls of the Asiatic Class and are smaller than the Brahma and Cochin and more active. The male develops a well-spread tail with the sickles often reaching sixteen or seventeen inches. Wow!

The closely-fitting saddle feathers, full hackled neck and upright carriage give the effect of a short back. The surface plumage throughout is close and smooth.

The body in both sexes should be evenly balanced on straight legs, with very little backward bend at the hocks. The height of the Langshan should be gained by depth of body not from the length of their legs. Available in Black, Blue, White, Cuckoo and Birchen in Europe. 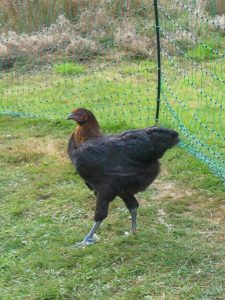 The best thing to feed newly hatched chicks is growers mash as this has a higher protein content which will help them grow big and strong.

Typically each chicken eats around ¼ of a pound (113g) of feed every day. If you start by feeding your chickens this much and then adjust according to how much of this they eat. If they eat all of this quickly then you should up the amount of feed.

You can either leave the feed in a feeder for them to nibble on whenever they want or feed them once in the morning.

There are lots of things that chickens shouldn’t be fed which you can find on our feed section.

The two most important foods to remember to not give your chickens are chocolate and beans as they have phytohemagglutinin and theobromine in which can cause heart problems and lead to fatalities.

Any food that has past its sell by date significantly or has visibly gone off should not be fed to chickens as it can make them very unwell.

You should first start by buying a coop that has 11 square feet per chicken. In the coop there should be a perch for everyone to stand on as they rest at night and laying boxes which you can fill with wood chippings.

The coop needs to have a fence around and over it to prevent predators attacking your birds and it is best if you can sink the fence into the ground so that they can’t dig under it. This breed prefers to be kept free range and needs at least 250 squares feet per chicken outside of the coop.

Make sure that in summer parts of this space is shaded as this breed doesn’t deal well with extreme heat. Their water container needs to be placed in a shaded spot as they only like to drink cool water.

Ensure that the water container is sturdy and can’t be pushed over. Once your chickens start nearing laying age they need access to grit for egg production.