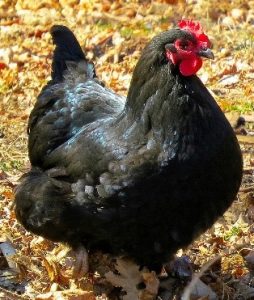 The Jersey Giant Chicken was originally bred in Burlington County, New Jersey USA by John and Thomas Black in the 1870s by crossing Black Javas, Dark Brahmas and Black Langshans.

The breed was initially called ‘Black Giants’, not because of their color but named after the two brothers’ surname ‘Black’.  This is a large breed, typically one of the heaviest of all chicken breeds bred to produce large roasting chickens.

In the 1880s Dark Cornish blood was introduced to the breed line, enhancing meat production with the aim of breeding a broader and heavier bird for the table.

In 1917 the breed was renamed ‘Jersey Black Giant’ to recognise and honor the state they originated from.

The breed was originally developed and farmed intensively to provide large sized ‘meaty’ roasting chickens to the nearby towns of Philadelphia, Wilmington and Trenton, with many Jersey Giants shipped further north to New York City.

Before the arrival of commercial broad breasted turkeys, the Jersey Giant was widely served as a roasting table bird in the USA.

In the 1920s, the Jersey Giant chicken arrived in Great Britain, but these birds were not hugely popular with large scale chicken farms, due to high rearing costs driven by a bird requiring large quantities of top-quality feed to thrive, and quite slow to mature.

The yellow skin of the Jersey Giant was also not very popular in the 1930s and this lack of customer appeal, combined with the breeds costly feed requirements and the expense of caponising, meant few chicken breeders were interested in keeping them.

During the last 90 years little has changed and there are still only a few breeders of the Jersey Giant in the UK.

Eggs can be large to very large in size.

These are a large but docile breed who are noted for their calm behaviour and robust health. Male Jersey Giant roosters are also calm and very rarely aggressive. Flocks of Jersey Giants have the added advantage of very little squabbling between birds in the flock.

They also make good pets. They can tolerate fairly cold conditions for short lengths of time, when properly housed and fed.

How do I tame Jersey Giant chickens?

The best way to tame a chicken is to handle it when it is still young; this gets your chickens used to people. If you have older chickens that need taming, try feeding them out of your hand regularly.

2 chickens is the absolute minimum you need for a flock, we recommend around 6 as a small flock number. Jersey giants flock should be maintained to the following ratio 9 females to every 1 male (i.e 9:1)

As these are large birds, ideally 6 to 8 square feet per mature bird in a coop. In a run around 30 square feet minimum per bird.

They will need a roost height of 2-4ft.

Jersey Giants love to be outside foraging for food. Luckily Jersey Giants don’t fly much, unless in danger, so high -level containment fencing above 5 feet (150 cms) is not necessary.

Some backyard flocks are kept in large sheds, rather like turkey flocks.

In general Jersey Giants get along well with other breeds of chickens, as Giants are noted for their calm temperament.

Giants and Bantams will get along fine, as long as they are not too closely confined and there is adequate room for the Bantams to get out from under foot of the much larger birds.

Flocks of Jersey Giants have the added advantage of very little squabbling between birds in the flock.

(New) Jersey Giant Chickens are usually black and kept as general-purpose fowl for heavy meat and egg production, typically producing around 4 eggs per week. The color of the skin is yellow giving a ‘corn fed’ appearance as a table roasting bird.

Blue/black feathers on the chest and neck are quite common and can give this breed a lustrous and distinctive green sheen. The beak is usually black with a yellow tip.

Comb, wattles and earlobes are all bright red and eyes are dark brown. Shanks and toes can either be black or dark willow in color and the bottom of the feet are yellow. There are also white feathered Jersey Giants and Blue Jersey Giants.

The New Jersey White Giants, which are usually light gray as young chicks, are naturally occurring white sport variations of the Black breed

The Blue Giants originated in 1981 near Bern Kansas, USA on the farm of Mrs. R. E. (Golda) Miller. The American Poultry Association recognized Blue Jersey Giants as a variety in 2003. 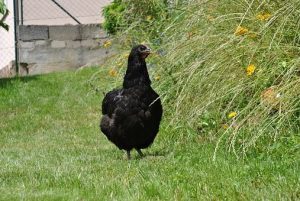 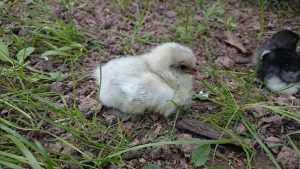 At 18 weeks your chickens need more nutrients to help with egg production so slowly start feeding them layers mash or pellets which has around 16% protein.

Chickens will need access to fresh drinking water all day long, they will prefer cool drinking water, no one is quite sure why maybe it’s a prehistoric throwback. As Jersey Giants are big birds it is important to have the feed and water at the proper height for all birds in the pen. Ideally feed and water should be at back level.

If the water is too low down, in order to accommodate bantams, the Jersey Giants may scratch litter into it and the water will go bad quickly.

Your chickens also need grit to help with egg production, so make sure there is always some within easy access to them at all times.

Jersey Giants are big hungry birds, but you cannot force feed them to accelerate growth when young; you have to patiently build the frame first and then put weight on using top quality feed.

Jersey Giants eat anywhere between 3.5 oz (99g) and 7 oz (198g) a day, but on average breeders feed their chickens 5.5 oz (155g) a day. Start by feeding them this and then adjust the weight of feed around how much they consume.

You can leave the feed in a feeder for them to eat whenever they please or you can give them set meal times. Jersey Giants love to forage outside for grubs and bugs.

Your chickens also need grit to help with egg production, so make sure there is always some easily acccesable to them at all times.

Chocolate and beans are the two main foods that shouldn’t be eaten by chickens. The phytohemagglutinin in beans can lead to fatalities and the theobromine in chocolate can cause heart problems.

Moldy food that has bad bacteria in it should not be fed to chickens as it can make them very unwell. For this reason, it is illegal to feed your chickens leftovers in the UK.

You should invest in a sunken fence to go over and around the coop to keep them safe at night. Find a water bowl which they can’t stand in or push over and place it in the shade, so the water doesn’t get too warm.

Feed and water for Jersey Giants are best placed off the ground, at around the ‘back’ height of the bird. Raised feed and water bowl holders are easily obtained.