Leghorn Chickens are small to medium sized birds that originally came from the Livorno area of Tuscany Italy.  The Italian Port of Livorno was traditionally known to the English for hundreds of years by the name “Leghorn”.  Varieties of Leghorn chickens also originated or were developed in England, Denmark and America. Leghorns are highly valued for their consistent egg laying ability, capable of producing up to 300 large eggs a year. They are not usually bred for meat as the body is small and lean.  Leghorns frequently win egg-laying competitions.

These superior egg laying birds thrive as free-range chickens and can do well in confined conditions, but prefer to be outdoors foraging. They are one of the most popular breeds of chicken in the world. They are in my top 3 favorites, for sure!  Currently the vast majority of Leghorn chickens are kept by large scale egg production farms. The first imports of Leghorn Chickens into the UK arrived about 1870 from America (white) and the brown birds a few years later. They were bred with Malay and Minorca chickens to increase the body size in the whites.

Leghorns comprise a group characterized by great activity, hardiness and prolific egg-laying qualities. The females are non-sitters, very few of them exhibiting a tendency to broodiness. They are the best egg layers of the pure breeds and have one of the most cost-efficient feed to egg ratio. For these reasons Leghorns featured strongly in the production of the hybrid laying birds that are now used commercially. 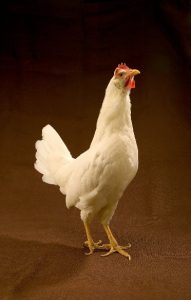 Leghorns are slightly built, sprightly chickens, with a slender curved body, carrying their tail high.  They are known as active, noisy birds with an independent streak.  Because there are so many different varieties of Leghorn chickens, all with slightly different characteristics, it is hard to generalise about their temperament.  Many varieties of Leghorns are noted for being very flighty, and will happily roost in high trees if they can fly off.  For this reason, breeders clip their wings to prevent flight.

My Leghorns prefer being outside foraging and will happily stay out for the whole day. Enjoying a diet of fallen fruit, insects, weeds and grubs. They are extremely agile and sprightly; able to fly in one ‘hop’ over a 10 foot (3 metre) high fence with ease. Leghorn roosters are protective of their hens and prefer to perch high up, so they can keep a good look-out for predators, such as hawks.

Leghorns are lively chickens, available as standard and bantam sizes.  Interestingly Leghorns can have either a single comb or a rose comb. The rose combs were specifically bred in the USA to deal with harsh cold weather, as the large single combs froze in northern winters causing the chickens to suffer frostbite. You really don’t want this! If you live in a very cold/harsh area please make note. The large floppy comb is a noted attribute of the Leghorn breed. 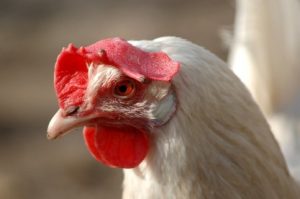 The Bantam has exactly the same looks and proportions as the large chicken, simply in a much smaller size. Like the standard size bird, Bantams prefer being outside foraging. If too closely confined Bantams will become bored and may start pecking each other.

Standard hen eggs are usually large, weighing around 2 ounces (57 gms). As the bird ages the eggs may get larger. Bantams lay eggs weighing 1.3 ounces (38 gms).  The largest egg laid by a Leghorn chicken weighed 11 ounces (320gms) and is kept at the Pasteur Institute in Paris.

Up to 280 eggs per year, for first three or four years.

Bantams will lay up to 140 eggs per year 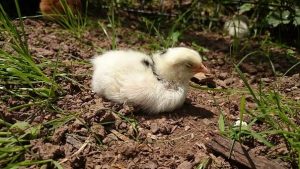 Leghorns chickens can be nervous and flighty around humans, for this reason they are not recommended as pets for children. These chickens are naturally wary, not usually affectionate with humans and do not enjoy being handled.

Leghorn chickens may become more used to humans if raised by hand as chicks. However, breeders often describe them as being noisy, flighty, standoffish and independent. These birds love to fly and explore, so high fencing is essential to contain them safely and pens need a wired top. As mentioned, many breeders clip wings to prevent flight.

One cockerel for around 5 hens is a good ratio.

Leghorns have a good reputation as productive egg layers of large eggs, requiring less feed than similar sized chickens of other breeds. They love to actively forage outside ‘far and wide’ in warmer months and require large spaces for this.

How do I tame Leghorn chickens?

The best way to tame a chicken is to handle it gently when it is still young; this gets your chickens used to people. If you have older chickens that need taming, try feeding them out of your hand regularly.  Leghorn chickens can become tame, but tend to generally ignore humans (unless offering food) and have a nervous, flighty nature.

A good idea to train them to regularly return to the chicken coop each night, is to feed them before dusk regularly.

2 chickens are the absolute minimum you need for a flock, we recommend around 5 as a small flock number.

Leghorns ideally require a very large, secure backyard to do well. Smaller backyards can accommodate Bantam Leghorns. Standard birds are medium size and can be confined in small chicken coops for short periods. Ideally 4 square feet minimum per mature bird in a coop and around 20 square feet minimum per bird in a run. Leghorn Chickens love being outside exploring and foraging for food, so must have good outside access to prevent boredom. These chickens are very good fliers, so high -level containment fencing is essential or you will see your chickens far away roosting in high trees or taken by predators!

Leghorns are not aggressive birds, but are nervous and ‘flighty’. Standard size birds are not considered a good breed for a small backyard. Most home breeders keep Leghorn Bantams as free range chickens, if they don’t have large backyards for standard size birds. They will get along well with other breeds of chickens, as long as there is no other male cockerel to cause aggressive behavior. It is vital the flock is not too closely confined and there is adequate room to explore outside and prevent boredom.

The Leghorn is a well-balanced, alert and sprightly bird. Leghorns possess a good set of powerful wings, which they frequently use to fly about at the slightest opportunity. The wing flight feathers should be clearly defined and the birds will happily fly high up into trees to roost, if allowed. There are 24 different ‘recognised’ colours of Leghorn chicken, ranging from pure white to pure black, with many interesting combinations in between. None of these birds are bred for meat, as the breeding focus has been on improving egg laying ability.  There are two varieties based on comb type, either rose comb or single comb.

Rose combs are bright red and medium size, square at the front tapering to a small spike facing backwards.

Plumage cover is good over the whole body, but not excessively full. No yellow skin is visible and the birds have reasonable cold weather insulation, as long as they have rose combs. Feet color can range from yellow, light brown to off-white and eyes are red. 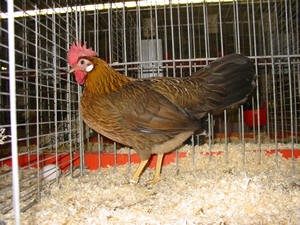 Chickens will need access to fresh drinking water all day long, they will prefer cool drinking water, no one is quite sure why maybe it’s a prehistoric throwback. It is important to have the feed and water at the proper height for all birds in the pen.

Ideally feed and water should be at back level. If the water is too low down, chickens may scratch litter into it and the water will go bad quickly. Your chickens also need grit to help with egg production, so make sure there is always some within easy access for them at all times.

As Leghorn are excellent foragers they will supplement their feed intake by hunting outside for insects, slugs, snails, seeds and bugs to eat.

Leghorns are small to medium sized birds, but are noted for economical feed consumption, despite their high egg output. They eat anywhere between 4 oz (113g) and 6 oz (170g) a day. On average breeders feed their chickens 5 oz (140g) a day. Start by feeding them this and then adjust the weight of feed around how much they consume.

You can leave the feed in a feeder for them to eat whenever they please or you can give them set meal times.

The most essential item you need to keep chickens is a coop, which should ideally be 0.4 m2 or 4 square feet per chicken. Their run needs 20 square feet (1.9 m2) per chicken. In the coop they should have a perch to sleep on and a wooden laying box for their eggs.

You should invest in a sunken fence to go over and around the coop to keep them safe at night. Find a water bowl which they can’t stand in or push over and place it in the shade, so the water doesn’t get too warm. Feed and water for Leghorns are best placed off the ground, at around the ‘back’ height of the bird. Raised feed and water bowl holders are easily obtained.