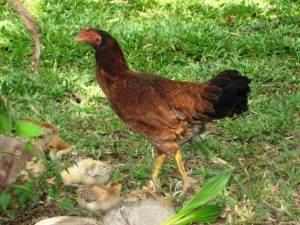 The Malay is a very tall, upright and muscular Asian, hard feather, game fowl. It is noted for being a rough, quarrelsome and pugnacious bird that does not take kindly to close confinement.

One of the oldest breeds of chicken, dating back thousands of years. The Malay reached the UK from the Malaysian peninsula, Indonesia and also from India in 1830. It was bred in these countries for cock fighting and has very powerful leg muscles. They also have strong thick bones and a hard, broad skull. It is the tallest of all chicken breeds and the cockerel makes an unusual rasping/growling noise, rather than a typical chicken ‘cluck’.

At the first poultry show in England in 1845 the Malay had its classification, and in the British Book of Standards of 1865 descriptions were included of both the black / red and the white Malay.

UK breeders developed it, particularly around Cornwall and Devon as the chickens arrived by ship at the busy port of Falmouth in the 19th century. These breeders used the Malay to regenerate other oriental breeds including Longtails and Gamefowl. Malay chickens were also used to improve the breeding lines of the popular Rhode Island Red Chicken in the 1800s.

In the 19th Century the unusually large Malay chicken became very fashionable and demand for birds was strong. This was due to its extreme height, long legs, short beak, unusual looks and vitality.

There are six recognised colors of bird, but it is the Malays gigantic size and large boned body that makes this unusual chicken stand out.

The Bantam has exactly the same looks and proportions as the large chicken, simply in a smaller size. Like the standard size bird, Bantams prefer being outside foraging. If too closely confined Bantams will quickly become bored and start pecking other birds’ feathers.

Malays were the first breed to be bantamized in 1899, with bantams proving to be more popular than the standard ‘large’ fowl. Bantams were still large in comparison to other bantam breeds, and it is difficult to reduce size further without losing the typical large fowl characteristics. Bantams should follow the large fowl standard in every respect except weight.

Malays are lean birds, used to living in hot climates, and their meat can be tough and dry due to a lack of natural fat, even when raised in colder countries. These birds thrive in the heat of Australia, Malaysia, Mexico & the USA. There are a number of successful breeders in these countries.

Bantams will lay up to 70 eggs per year.

Malays are naturally bold and wary. Unless raised with constant gentle human handling from very young, they are not usually affectionate.

They are known as active, noisy birds with a very independent streak. These are not flighty birds, due to their heavy body weight and small wings. They hate being confined and do best in a free-range environment. Malays will happily stay out for the whole day, foraging from dawn to dusk, enjoying a diet of fallen fruit, insects, weeds and grubs

As with other game fowl breeds, the Malay is not recommended for novice breeders or for young children to keep as a pet.

Malay chickens will ‘tolerate’ being handled, if regularly hand fed as chicks.

One cockerel for around 3 hens is a good ratio. Malays are usually kept as ornamental birds.

How do I tame Malay chickens?

The best way to tame a chicken is to handle it gently when it is still young; this gets your chickens used to people. If you have older chickens that need taming, try feeding them out of your hand regularly, but this may not work well with Malays.

Malay chickens can become tame, but tend to generally ignore humans (unless offering food) and have an aloof ‘standoffish’ manner.

A good idea to train them to regularly return to the chicken coop each night, is to feed them before dusk on a regular basis.

2 chickens are the absolute minimum you need for a flock, we recommend around 4 as a small flock number.

Roosters are protective of their hens and will fight violently with other male birds. Bare this in mind if you already have rooster/cockerels.

Malays were imported to Ireland, Holland, Germany, Australia and the USA, but currently there are only a relatively small number of breeders.

Malays require a very large, secure backyard to do well. Smaller backyards can accommodate Bantam Malays. Standard birds are very large in stature, hate being confined in small chicken coops and can rapidly become violent with one another through boredom.

These chickens rarely fly, so high -level containment fencing is not essential. As with all chickens, they do need adequate fencing to protect them from predators.

Malay cockerels are aggressive and do not get on well with other male birds of any breed, constantly fighting and causing injuries.

Standard size birds are so large that they not considered a good breed for a small backyard. Most home breeders keep Malay Bantams as free range chickens, if they don’t have large backyards for standard size birds. They will ‘just about’ get along with other breeds of chickens, as long as there is no other male cockerel to cause aggressive behaviour. It is vital the flock is not too closely confined and there is adequate space to explore outside to prevent boredom.

The Malay is a large, powerful, solidly built bird that can be over 3 foot tall (92 cms). It’s long legs and great height make it walk with a heavy gait, almost like a small velociraptor dinosaur. These can be clumsy birds when fully grown.

Malays come in six recognised colors: Black Breasted Red, Spangled, Wheaten, Red Pyle, Black and White. They have unusual ‘projecting’ eyebrows which make them look even more aggressive than they actually are. Their yellow hooked beaks are broad and short. Eye colour is pearl off white or yellow

They are closely feathered birds with hard, short feathers, carrying their body upright with tail low or drooping down. The Malay has a small thick half-strawberry or walnut comb with yellow shanks, large feet and large scales. They have very small or non-existent wattles.

These birds are not usually bred for meat, as the breeding focus has been on improving egg laying ability. The meat of the Malay chicken is typically tough, dry and stringy, with little naturally occurring fat.

Excessive protein in feed is not good for Malay chicks, as it may cause muscle and bone problems if they are forced to grow too fast.

Chickens will need access to fresh drinking water all day long, they will prefer cool drinking water, no one is quite sure why maybe it’s a prehistoric throwback. It is important to have the feed and water at the proper height for all birds in the pen. Ideally feed and water should be at back level. If the water is too low down, chickens may scratch litter into it and the water will go bad quickly.

Your chickens also need grit to help with egg production, so make sure there is always some within easy access for them at all times. As Malays are excellent foragers they will supplement their feed intake by hunting outside for insects, slugs, snails, seeds and bugs to eat.

Malays are very large birds and have large healthy appetites. They eat anywhere between 6 oz (170g) and 8oz (225g) a day, depending on their natural intake from free-ranging on fresh grass areas. On average breeders feed their chickens 7 oz (198g) a day.

Start by feeding them this and then adjust the weight of feed around how much they consume. You can leave the feed in a feeder for them to eat whenever they please or you can give them set meal times.

The most essential item you need to keep chickens is a coop, which should ideally be 0.6 m2 or 6 square feet per chicken. Their run needs 40 square feet (3.7 m2) per chicken. In the coop they should have a strong perch to sleep on and a wooden laying box for their eggs. Malay chickens are best kept as free-ranging birds, with plenty of outdoor space for them to roam.

You should invest in a sunken fence to go over and around the coop to keep them safe at night. Find a water bowl which they can’t stand in or push over and place it in the shade, so the water doesn’t get too warm. Feed and water for Malays are best placed off the ground, at around the ‘back’ height of the bird. Raised feed and water bowl holders are easily obtained.

Malays are large bold, lively chickens and quite hardy when they become adults. However, because of their minimal feathering and lack of fluffy down, they don’t have sufficient natural insulation to survive prolonged low temperatures. For this reason, they are not recommended in areas with cold winters. Malay chicks require careful raising and also do not like cold weather or constant damp with low temperatures.

Malay hens are poor and seasonal layers, not noted for being highly productive egg producers. The hens brood well, although they have short, narrow, hard feathers and large legs. Meaning they cannot cover many eggs at one time.

Baby chicks do not get on well with Malay roosters, who can be cruel, pushing chicks around mercilessly. It is therefore essential to keep chicks separate from the roosters, to avoid unnecessary chick fatalities.