The North Holland Blue is a rare breed of chicken that is named after its origin country: the Netherlands. It is thought that this breed first came about in the early 1900s when the Belgian Malines was bred with other Dutch breeds in order to create a hardier chicken.

This breed of chicken is usually found only in and around the Netherland and the UK, they were first imported to the UK in 1934. The North Holland Blue is a dual-purpose bird as they were originally bred as a table bird but they can also be kept purely as layers as they produce a fair amount of eggs per year. The demand for North Holland Blues declined as American breeds outgrew them in demand and popularity as a meat breed. 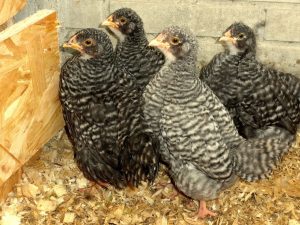 This breed is renowned for being calm and docile. They are great pets if you have enough space to keep them free range.

How do I tame North Holland Blue chickens?

Taming chickens whilst they are still very young by holding them in your hands is the most effective method. If you prefer not to pick them up or have chickens that have already matured, then you can try and tame them by having them eat out of your hand.

You should never have less than two chickens as they get lonely by themselves. Ideally, you should have a minimum of six chickens in a small flock.

They prefer to be kept free-range as they love to forage. This means you need at least 25 square feet per chicken.

Yes, this is an especially calm breed so they should integrate well with other chickens and you shouldn’t have any problems with bullying or aggression.

There is only one standardized color of plumage which is cuckoo. Despite their name, they are not actually blue in appearance, but some claim they look blue from far off. They have been described as ‘auto-sexing’ as males tend to be lighter in color than females whilst they are still young. The breed standards in Britain require some sparse feathers on the legs, whereas, in the Netherlands and New Zealand the breed standards dictate bare legs. They have a red single comb and white skin on the body. 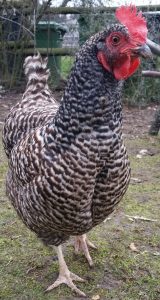 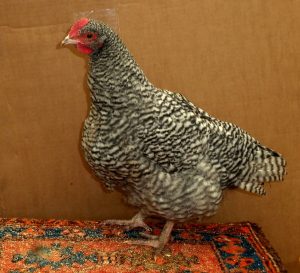 Growers mash should be fed to young chicks until they are 6 weeks old. Growers mash is a refined type of chicken feed that has the right nutrition, such as higher protein content, for growing chicks.

Once they’re around 6 weeks old you can give them chicken pellets as they should be big enough to eat non-refined feed. Chicken pellets are just your typical chicken feed, with 15-16{cfcd481556a8b43fba6af451761032bd323e94372a0c1e607} protein content, condensed into pellets.

When they start approaching laying age, so from around 14 weeks, gradually introduce layers mash or layers pellets into their diet. This form of feed contains all the nutrients they’ll need to support them with egg production.

The average chicken eats ¼ of a pound (113g) of feed a day. This amount would be good to start feeding your chickens before they are fully grown. Add to the feed little by little as they get closer to maturity and adjust the weight consistently based on how fast they eat this or even if they eat all of it at all.

There are a fair few common foods that are lethal to chickens if they are fed it. The main two offenders are chocolate and beans; this is because they contain theobromine and phytohemagglutinin, both of which are known to be fatal to chickens. Anything that you wouldn’t eat because it has gone off shouldn’t be given to chickens. If it’s not safe for you, it’s probably not safe for them!

A coop for your chickens is the most important bit of kit that you will need. The coop should have at least 11 square feet per chicken, as this is a slightly larger breed a little bit more than this would be recommended. Each chicken needs a perch inside the coop which will act as their bed during the night; there should also be laying boxes for hens to lay their eggs in. The coop needs to be protected at night from predator so there should be a fence going around the vicinity and over the top, as well as sunken into the ground.

As this breed loves to forage they will need at least 250 square feet per chicken of space to roam freely in. Your chickens will need water, buy them a container that won’t be easily knocked over and that they can’t get into for a nice swim. If you have no naturally occurring grit then you will need to buy some and keep it in an area that the chickens always have access to.