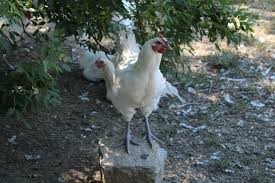 The Bresse Gauloise is a breed of chicken originating in the region of Bresse in the East of France. It is thought that the bird dates back to the 16th century and the white variety of this chicken is famed for its meat. The breed nearly went extinct at the beginning of the 20th century, but due to some hardworking breeders, the population was revived. There are lots of restrictions around the Bresse Gauloise, the most significant being that any chickens of this breed raised outside of the Bresse province cannot be called Bresse, but instead must be called Gauloise. Male’s weigh 5.5-6.6lbs (2.5-3kg) and females weigh 4.4-5.5lbs (2-2.5kg).

They can be timid and flighty 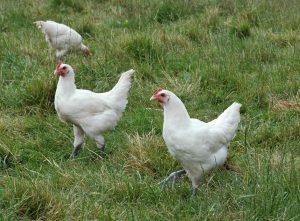 How do I tame Bresse Gauloise chickens?

The easiest way to get your chickens used to human contact is to pick them up and hold them whilst they are young. If you have older birds you can try feeding them from your hand to tame them.

Chickens do best in groups, an ideal small flock size would be 6 chickens, but if that’s too many for you then you need at least 2.

These birds love to forage therefore they need to be free range. Free range birds need up from 250 square feet per bird.

When they’re young they’re known to be aggressive, but once they age they become timid. Only mix them with birds who don’t have an aggressive temperament.

There are four different varieties of this breed: the white Bresse de Beny, the grey Bresse de Bourg, the black Bresse de Louhans and a blue variety.

The White variety is by far the most famous and has often been referred to as the kings and queens of poultry. They have clean white plumage and striking blue legs, with a red crest. 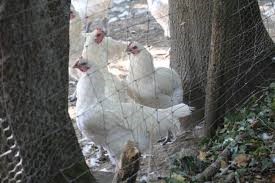 From when your chicks hatch to 6 weeks old they should be fed growers mash, this is a really small form of chicken feed which is easier for their small beaks to eat and also has a 19{cfcd481556a8b43fba6af451761032bd323e94372a0c1e607} protein content along with all the nutrients they’ll need to grow into healthy chickens.

Chickens can eat anywhere between 2.9oz (80g) and 4.2oz (120g) a day. Start by feeding them a ¼ of a pound (133g) of feed and then change this amount based on how much of this they eat, if they eat this quickly the you should increase the weight.

You can either feed you chickens as meal times or leave feed in a feeder for them to eat as they please.

The most important things that shouldn’t be fed to chickens are chocolate and raw beans. Chocolate and beans have theobromine and phytohemagglutinin in which causes health problems when ingested by chickens and can lead to death.

There are lots of other foods that can’t be consumed by chickens that you can find on our feed page. Moldy food should not be given to chickens as it can also make them very unwell.

In some countries such as the UK, it Is not legal to give your chickens scraps from the kitchen to eat as it can make them unwell.

You need a chicken coop which has 11 square feet or 1.1m2 per chicken. In the coop there should be a perch for each of your chickens so that they can sleep standing on them at night.

Once your eggs start laying you need wooden laying boxes which you can fill with wood shavings. As the chickens  are free range you need land around their coop which should be at least 250 square feet per chicken.

You should have a fence around the vicinity and over the top of the coop which is sunk at least at feet in the ground to protect your chickens once you’ve shut them in for the evening.

When choosing a water container choose one which can’t be knocked over or stood in and place it in a shaded spot as chickens prefer to drink cool water.

If you have no grit nearby you should buy some as it is vital to egg production and should always be available. 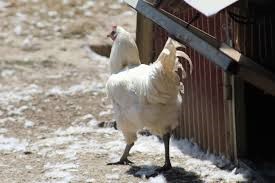