It is a true bantam with no large fowl counterpart. Early pictures describe ‘small chickens from Java’ that look very like Rosecombs so it is likely that they derived from judicious crossing of these birds. They have been used in the make up of many other bantam breeds.

Historical thought is that the first Rosecombs descended from the earliest bantams origin of the breed being attributed to breeds dating further than most books. It has been claimed to originate in England,. Breeders have claimed such diverse areas as Java, Holland, Africa and Hamburg, although this is claerly is impossible as the birds pre-date the city. In America the breed was referred to as African bantams. Documents show they were entitled as in the First Boston Show of 1849. This continued until 1904 where both white and black Rosecombs were shown at St. Louis World Fair as Africans.

Earliest documents on the breed date back to 1483 where a man named John Buckton who owned the Angel Inn in Grantham raised black Rosecomb bantams he inherited the birds (from his father) indicating that the breed must have been in existence prior to 1483. The birds were described as having prominent combs and white lobes, two of the important characteristics of the breed. Documents said that King Richard the Third, who retained rooms at the Inn, aquired some birds making them popular with English gentry.

They are a quite hardy for both hot and cold weathers. So a good all round bird if you have warm summers and harsher winters.

Breeders Tip: In really harsh winters placing grease or Vaseline on the comb and ears can help stop them freezing. Large combs can freeze quite easily and be very painful for the birds.

They make great pets and like most bantams are fantastic for children. They are very friendly and whilst they are active birds, they have a good calming temperament. Purchasing eggs to hatch out in an incubator can prove slightly more difficult. They have a fairly low hatch rate because of a 40-55{cfcd481556a8b43fba6af451761032bd323e94372a0c1e607} fertility rate. Id suggest maybe purchasing one or two more chicks or fertilized eggs than the total number you want. So that you have a better chance at having a successful flock.

How do I tame Rose Comb chickens?

They may seem quite flighty, and it’s worth noting they are infact good fliers. Hard to believe given the size of their small wings. They are easy to tame and the best way is to handle them regularly a chicks. About 2-3 times a day each will be enough for them to get used to you and being picked up. If you purchase an adult hen or rooster taming them will start best by feeding them treats from your hand and spending time in the run or coop with them. Cupboard love it maybe, but I works a treat. You soon after have them enjoying cuddles in your arms!

They aren’t a solace bird but a lively active social breed. I recommend that you buy, at a minimum, in pairs. A great number for a small backyard flock is 6. When you get 9 females you need to add a male rooster into the flock. As the best ratio for keeping Rosecomb bantams is 1 male for every 9 females.

They will tolerate confinement, and as a smaller bird will naturally require less space. 11sqft is a minimum per bird. They do like to fly a bit and flap their wings; people often confuse this as being a sign they want more space or infact to be free range. This isn’t always the case and they are happy flapping around in runs or cages outdoors.

Yes. Very occasionally the males can be aggressive. Its important to stamp this out straight away. I never suggest mixing bantams with larger breeds. However you might be able to get away with it here as the Rosecombs are active and alert birds. They will, in other words, ‘stick up for themselves’. If you see any bullying from the other chickens remove them straight away. Some chickens can peck repeatedly and very hard, cause lasting damage.

Very easy to spot – they have a rose comb ofcourse! The males’ combs are bigger and often longer than the females so easy to differentiate the sex, upon looks. The ear lobes are a gorgeous pearl white color making them look like they are wearing earings. Again, the male ears are larger than the females, another give away.

The Rosecombs come in a huge number of colors from ‘ginger red’ to ‘barred’ to ‘lemon blue’. They are all as gorgeous as each other but my favourite is the blue, striking feathers with white ears really set this bird apart from others. 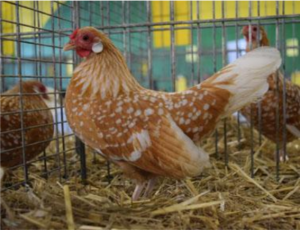 As chicks they need feeding ‘chick crumb’ or ‘starter crumb’ both are the same thing called a different name. Feed them this up to 6 weeks where its important to switch them to a ‘growers mash’. This contains all the right nutrients for there development into larger birds.

Now two weeks before you they are due to start laying (from 22 weeks +) they will be moved onto another feed type. This is called either ‘layers mash’ or ‘layers pellets’. Both do the same thing but are not the same! Layers pellets should be bought in a ‘bantam’ size. It will say ‘Bantam’ clearly on the bag. Essentially bantam layers pellets are smaller versions on the standard layers pellets. Why? Because bantams are smaller and therefore cant swallow as much in size.

Going back to something I mentioned above, ‘layers mash’-  this is just layers pellets in a ground up form. So really great if you have very small birds or bantams on the point of lay. Means you don’t have to worry about whether they can eat swallow it properly or not – that’s one less stress!

Don’t forget, one last vital thing chickens of any breed require is something called ‘grit’.

Bantams will eat less than larger birds but Rosecombs are no different to any other bantams eating just over 2oz (60g) per day. As chicks I have the feeder always full, they will help themselves as and when they require it and I will Top up whenever it looks low. However with adult chickens I tend to measure out the feed on a daily basis so that I know they have been fed correctly and none will go to waste or worse, attract vermin.

Actually this might surprise you chickens can’t eat chocolate or beans. Dried beans in fact are worse than non dried. How might these 2 things creep into a chicken’s diet; well quite simply, usually from leftovers from the dinner table. Also be sure if you’re Rosecombs can wander out the run, that they don’t have access to bean plants. Both can cause cardiac arrest, a tragedy and one that should be avoided with some vigilance.

Well let’s start with the basics of a coop, Rosecombs need a roost height of between 2-6ft. So you will need a good coop with the roost bars at the correct height. Also nesting boxes for the Rosecomb hens to lay eggs in, these can be lined with hay, straw or even wood shavings.

Next on the list is a waterer, I would suggest getting a metal one. The first reason why metal ones are better than plastic ones is that they will keep the water cooler for longer. Chickens prefer cooler water so they will thank you for this.

The second reason is the metal ones are slightly heavier meaning that the chickens are less likely to knock it over. A knocked over waterer means chickens could have no water all day. This can cause serious dehydration especially if it’s not spotted straight away by yourself. The 3rd reason is that metal lasts a lot longer than plastic. My metal one is coming up for 20 years old still works fine and dandy. This is going to save you in the pocket therefore. Place your water in the shade where all the chickens can access it and place it on flat ground.

Trust me they are going to want to be fed! A feeder should be on the shopping list, again a metal one will last a lot longer. Given that Rosecombs aren’t very tall the feeder should be easily accessible by the chickens with a low lip. Avoid purchasing something that chickens can climb into so that they don’t poop in it and spoil the feed.