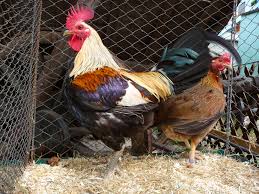 The Sicilian buttercup was first found on the island of Sicily which is just off the coast of Italy in the Mediterranean sea. However many believe the breed existed somewhere else before but no on really knows where. Poultry historians actually have a theory that as a breed they are very very old and have roots which are a couple of thousand years old.

Another theory is the Sicilian Buttercup, probably did not originate in Sicily but in the Italian colony of Tripoli. There was possibly a crossing between the native north African breeds possibly the Fayoumi or similarly marked birds and Italian breeds. Some also suggest that the French Houdan was added. The first importation from the island of Sicily coming to America in 1835 this was believed to be by the immigrants arriving in America looking for a new life. The US Buttercup club was formed in 1912 and in 1913 Mrs Colbeck imported them into the UK.

The Buttercup owes its name to the cup-shaped comb, its most characteristic feature, and the golden ground color of its plumage.

They arrived in America in the 1830’s, and were believed to be brought by immigrants. They were accepted into the APA in 1918.

They mature early and can start laying from 18 weeks onwards.

Breeders I know have said that often they can start out as quite flighty birds that are independent and avoid humans. Probably a survival instinct from originally being on an island. However in a small flock situation they do become much friendlier and a lot calmer.

How do I tame chickens?

With this breed in particular they need to handled lots to get them used to interaction. They maybe ‘stand offish’ at first so id recommend getting some treats and start by dropping them near the bird and then closer towards you when eventually they will be comfortable right next to you. You can then feed them from your hand and pick them up. The first time you pick them up as adults, if they haven’t been handled as chicks, they may wriggle and want to get free.

On average 11sqft per bird is normally recommended. They will need to roost at a height of 2-4ft. They are fairly active birds so would suit more of a free range situation or a backyard where they can roam in a large coop.

They will mix well in small flocks. Typically mixing well with any other breeds too. The males aren’t reported to be aggressive either so would mix well into any existing flock aswell as a new flock.

There are only two standardized colors, the Golden and Silver. The females are superb looking, they have a vivacious golden/yellow head and neck and a golden buff body. The body has dark black spangling and flecks and they have a dark black tail. The flecks on the body almost look barlike.

The comb is truly unique. This is where it gets its buttercup name from, the comb is cup shaped. It actually looks like a crown, the comb is a genetic variation that was produced from a merged side by side single comb. It merged at the front and rear forming the cup or crown comb.

The buttercups eat like any other chicken. Chicks should be eating chick crumb or chick starter. They are growing so quickly at this stage they need all the right nutrients found in these feeds to sustain the growth.

Then at 6 weeks they will need to start eating growers mash or growers pellets again growth is key at this stage and this feed contains 15-16% protein. Protein helps development and growth of joints and muscle.

The buttercups are early to mature so from around 18 weeks start feeding them layers pellets. Layers pellets are specially designed to have the requirements for chickens on ‘the point of lay’. Meaning they are about to start laying eggs very soon. Chickens need ‘grit’ and it easy to come by. It’s usually something new chicken owners miss or gloss over but it’s really important. Grit is essential for helping the chicken grind up their food.

Sicilian buttercups eat between 2.9oz (80g) and 4.2oz (120g) per day per bird. This will be weather dependant however and the hotter it is the less the bird will eat generally.

Good question. As most people think chickens can eat anything please listen to the next few sentences as it could save a potentially nasty situation. Two main things that really causes fatalities in chickens is dried beans and the second is chocolate. Surprising, I know, but both can be deadly to chickens causing cardiac arrest.

Whilst these foods items can sneak in with scraps fed from the table be careful that they don’t forage beans. Bean plants can grow anywhere and could be accessible to eat from the coop. Free range chicken owners need to be even more aware as they can eat things without you even knowing.

For more information on feeding chickens and chicken feed in generally hop over to our chicken feeds page. We discuss things in more detail there.

Well lets start with the basics you’re going to need a coop, if that isn’t already obvious. Something similar to this one will suit Sicilian Buttercups. They have a large comb and so remember need the head space. They need a roost height of 2-4ft too so id recommend this

A waterer is essential plastic or metal. My advice is metal ones last longer and keep the water cooler which chickens like. The down side is cost a bit more than the plastic ones initially. However they last a lot lot longer. The other advantage over a plastic one is they are less likely to be knocked over than a lighter plastic one. If you’re out and don’t see a knocked over waterer they can be without water all day and that can cause dehydration and serious issues.

A feeder is next on the list. So this is something that you place the chicken feed in. Some people scatter the food, sometimes I do to. Generally the feed will go bad quite quickly that way id recommend keeping it off the floor and dry. In the shade if you can too. Chicken when eating will walk about and even try and get in the feeder. Often then they poop and this turns the feed bad – as you can imagine. To prevent that, a feeder like this ticks a lot of boxes.

Don’t like the cold, as due to the comb size it can freeze, so bare in mind if you live in a cold climate.