These birds have been mentioned in writings for several hundred years. The explorer Marco Polo in the thirteenth century, described discovering chickens with ‘fur’. They’ve made amazing pets ever since and are excellent broodies.

Although many people tend to think of them as just bantams, in the UK Silkies are classed as large fowl. However, in the last ten or so years a proper bantam strain has been developed.

Silkies are one of the oddities of the poultry world with their nearly black skin, face, comb, wattles and bones, and their hair-like plumage in which there is no web.

Ancient writers referred to fowl with hair instead of feathers and they are believed to have originated in Japan although information of them also comes from India, China and the Malay states. Ancient Chinese folk medicine attributed the black skin as even having potent powers!

They are further distinguished by a crest, which all Silkies have but then they are further divided by either the bearded and non-bearded varieties – they also have five toes, rare in the chicken world.

Between 18-25 weeks. However, production once it does start will be interrupted by periods of broodiness. 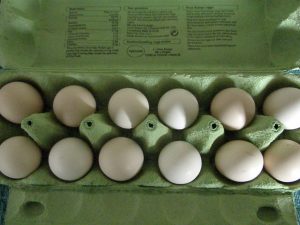 Whilst there are Silkies in cuckoo, lavender and even red colors they are not accepted as a standard by the APA yet.

Below is a photo of our gray we called ‘bear’. 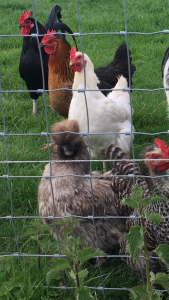 They don’t do well in extreme climates (hot or cold) as their feathers don’t hold heat, keep the heat out or shed any water.

The Buff, Blue and Back are all cold hardy, but not heat hardy, so ideal if your in a cooler climate or live in an area with a very harsh winter. The splash is neither cold or heat hardy so great for a moderate/temperate climate.

The buff however, like mine below, is both fairly hardy in the cold and heat. The best allrounder, oh and I mention she is gorgeous!

They make the best pets and will live for 6-9 years on average. Mine are so friendly and docile they are really recommended for anyone, old or young, but children absolutely love this breed. They will sit on your lap, feed from your hand, and enjoy cuddles for hours on end. All their amazing personality traits makes up for the fact they aren’t the best layers of eggs.

Mine are the first to run over the fence to greet me and show me as much loyalty and affection as any dog I’ve ever had – thats saying something!

How do I tame Silkie chickens?

This is probably the most easiest breed to tame. I have owned several and each time i’m amazed at how quickly they warm to me. They are so lovable and make instant friends with everyone they meet. Id almost say they come pre tamed; there is some instinct within them from birth that just loves people. 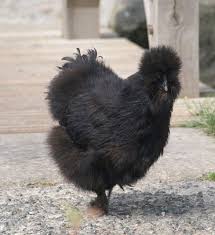 A minimum of two. They are happiest with 6 females to every one male, so a ratio of 6:1. I would say that you cant really have too many they all get along with other Silkies.

Not a huge amount, however a minimum of 11 square feet per bird (1.1m2) that’s a minimum. They prefer confinement, and mine definitely do over being free range, I did have them free when I first bought them years ago and they didn’t like it, they just didn’t seem happy.

If there is grass in the coop make sure its short, like with all the fluffy breeds within the grass there maybe ticks etc. The Silkies being so fluffy and small, so having feathers touch the floor a lot of the time, this is where the ticks and mites and other nasty crawlies can get at them.

Also they don’t like to be on the floor (and short grass is best), where its too muddy. Some access to dirt so they can bath in it but for the same reason as not having long grass, the mud will get everywhere all over the feathers etc.

Yes and No. Yes with other Silkies and docile birds like the Polish chicken. I have mine in with my other bantams and that’s it.

What I found was when they were in the coop with the larger more active birds they were being bullied. That went for both the hens (females) and the roosters (males). My tips here is if you see other hens pecking or specifically pulling the feathers on the Silkies head, remove the Silkie from the coop.

They mix well with my alpacas and pygmy goats! N.B I do keep them away from male ducks however. 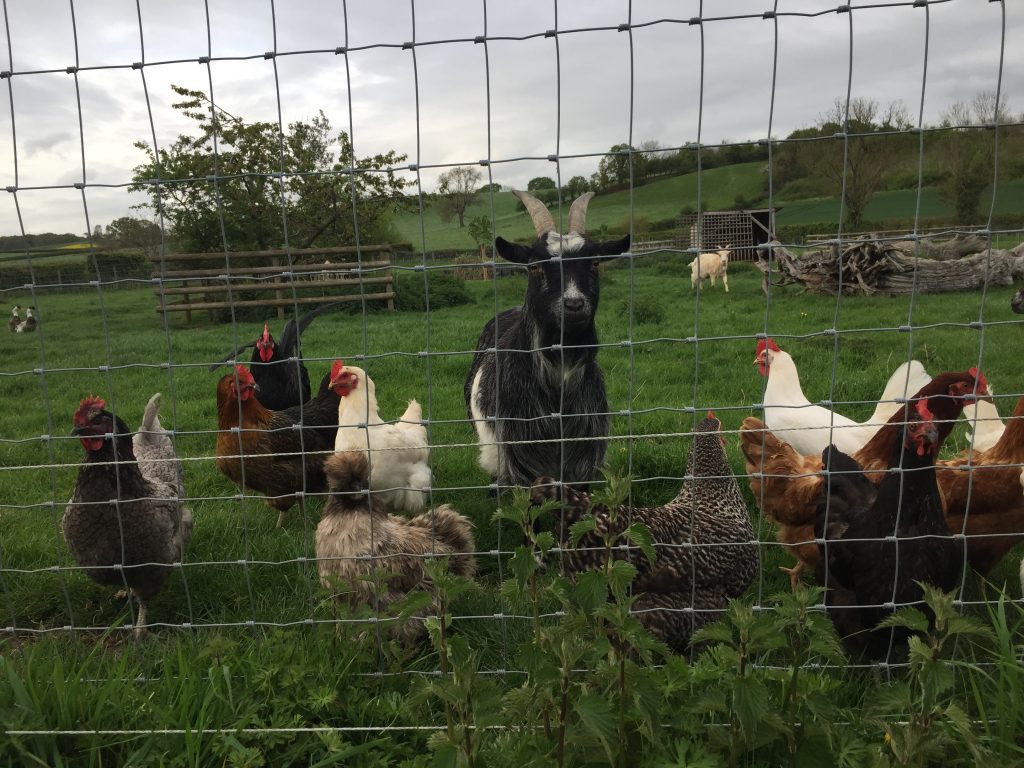 To be quite frank they look like walking teddy bears. They have been confused even with rabbits in peoples backyards! There’s cute fluff everywhere, literally from head to toe.

They have a walnut comb, their wattles are small to a medium size, but their earlobes are very small. The earlobes are an amazing aqua turquoise blue. The comb and wattles are a mulberry to dark black color. Their eyes are black too, but don’t worry not in a scary way! Shanks and toes are bluish black. 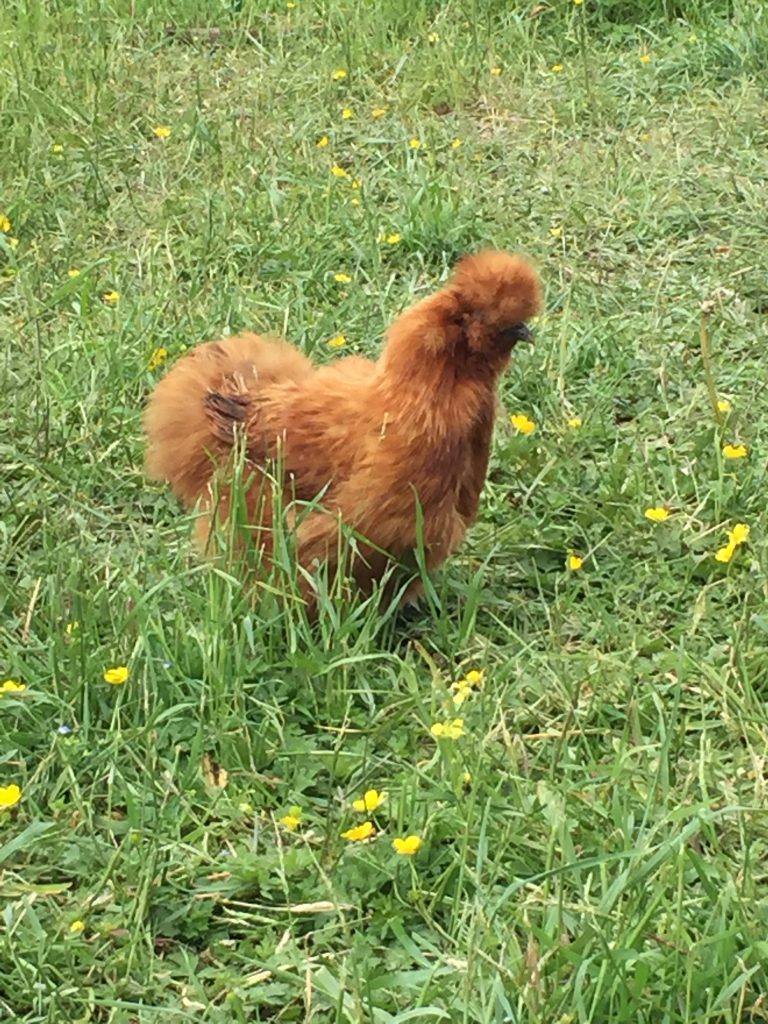 Nearly everyone is mistaken in saying its just ‘black’ it is does in fact have a slightly bluish tinge aswell.

How to you tell the boys from the girls is the number one question i’m asked and i’ve a few breeders tips that may help you.

The crest – a Silkie male crest will be shaped differently to a females. The male crest looks more pushed/swept back. The females will be more rounded.

The comb – males have a larger comb then females, this is the general rule of thumb and their comb will develop faster than the females.

Feathers – cockerel feathers on the back just in front of the tail and the neck (known as the hackle and saddle feathers) will be longer and slightly more pointier at the tips.

Of course the obvious one (that’s not so obvious when young chicks!) is cockerels have spurs and the females usually don’t.

So if you raise you Silkies from new born hatchlings straight out the incubator, or get them as few day olds, from a seller they need to eat chick crumble or chick mash. Both are designed for chicks to eat upto 6 weeks old.

After 6 weeks, upto around 18 weeks they need to eat growers mash which is perfect for them at this developmental stage and contains all the correct nutrients for them.

Up to 18 weeks some people use medicated feed, I don’t and have never had an issue. I think some people do it out of paranoia. Mediated feed is feed with medicine in that is specially for growing chicks as they can pick up a disease. My girls are all non GMO, organic, soy free etc right from the word go. Its about making the right decision that suits you however, as you have to be comfortable.

Now from 18 weeks onwards they are on the ‘point of lay’ meaning soon they are going to lay their first gorgeous egg. So feeding them the right stuff is critical as they need all that extra goodness to make an egg. So mine have always much preferred either a chicken feed pellet called ‘bantam pellets‘ or a ‘layers crumble’.

The bantam pellets are smaller versions of the normal layers pellet, specially deigned for Silkies and other smaller breeds. They will eat this from 18 weeks onwards.

A mature egg laying Silkie will eat between 1.4oz-2.8oz (40-80g) per day. I’ve calculated it based on what mine eat and it varies across the year as the temperatures differ but that’s about the right average. That’s less than larger birds as they are smaller. They eat less in summer as its hotter, and more in winter when its cooler and need the extra fuel to keep warm.

0-18 weeks (or whenever they lay their first egg) I leave feed in the feeder and they eat as much as they want, I don’t measure out or weigh portions. This just means I always know they have food and allows them to eat whenever they are hungry much like any baby animal would.

Never, never, never feed Silkies (or any chickens for that matter) beans, especially dried beans; or chocolate. Both can be fatal to chickens, often causing a cardiac arrest. Make sure beans aren’t in any scraps that you may accidentally feed them and do yourself and them the favour and eat the chocolate yourself!

For more reading check out our chicken feed page, its covers everything in much more detail so you know all the facts!

Silkies are extremely popular in the US, UK, Canada and Nigeria. Nigeria, and some states in the US have very hot summers. Provinces in Canada and areas in the UK and US can have very harsh winters. As previously discussed Silkies aren’t best for extreme climates.

Id recommend a coop therefore, like this one, as Silkies need to roost at 0-3ft off the ground, need shade to keep cool and a good ‘indoor’ space when its cold outside to keep warm and dry. Silkies don’t lay a huge amount of eggs but your still going to need a nesting box, which that coop has got. About 4-5 birds per 1 nesting box in the coop is a great ratio.

You’ll need a waterer, placed on flat ground topped up with fresh drinking water everyday. Id recommend two things, a metal one and one that holds slightly more water than you need so on hot day when they are drinking more than normal, you covered. Don’t get caught out here, water is essential.

Ofcourse you going to need a feeder, here is my recommendation having been and bought all the good, bad and ugly ones over the years! This one here is great, very robust and should last alot longer than most.

DO NOT but one with an ‘open top’ chicks or chickens will jump in poop, so the feed goes bad and has to thrown away. This is costing you and wasting good feed! I cant stress this enough. It will also mean the feed will get wet when it rains so again has to be thrown.

Plus if its in direct sunlight it will speed up the shelf life of the feed and it will ‘go bad’ alot quicker. Have I made my point, ok i’m off my soap box! Honestly a chicken feeder like this will serve you well.

My big tip here is look for reputable people/breeders. So much is done online now that you don’t always meet the people especially as they can ship hatching eggs in the post.

If you want a true color Silkie your best off looking for a ‘master breeder’ some associated perhaps with the Silkie chicken society/ breed club, would be a good place to start. 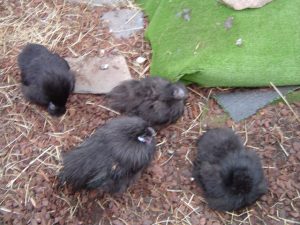 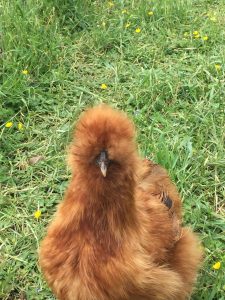 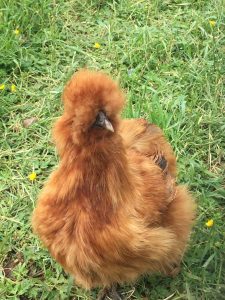