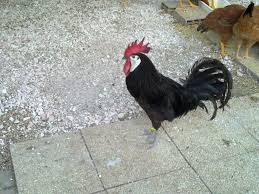 Also known as the ‘clown chicken’ the Spanish chicken is one of the oldest Mediterranean breeds of chicken. Despite the name, it is thought that these chickens did not come from in Spain and their country of origin is unknown.

During the colonisation of the new world Spaniards took this breed to the Caribbean in the 16th century and it is understood that this was one of the first breeds of chicken to be brought to the United States.

The American Poultry Association registered this breed in 1874. The Spanish chicken population has since depleted and therefore they have been registered as having a “critical” conservation status, because of this an additional licence may be required.

Around 180 eggs per year

They can start to lay eggs as early as 16 weeks, however this is dependent on the environment and the weather as a cold winter can delay egg laying.

Temperament / are they good pets?

Spanish chickens have a wide range of personalities that range from entirely friendly to troublesome. All Spanish chickens are fairly noisy and are considered remarkably active, overfeeding of protein can exaggerate these characteristics.

How do I tame Spanish chickens?

To tame Spanish chickens it is best to buy them as young as possible, this way you can get them used to human interaction from an early stage. If you are buying older chickens be sure to ask your breeder whether they are already use to humans, this way they will be easier to tame.

If you are trying to tame your chickens it is important that you try and handle them whilst they are young, try feeding them food out of your hand to get them used to human contact.

Spanish chickens have become hard to come by so getting you hands on a large amount may be difficult. The number of chickens needed depends on the amount of space you have and how many eggs a week you would like.

If you’re keeping Spanish chickens for egg production you should base your flock numbers on your expected output of eggs, keeping in mind that Spanish chickens lay on average 3-4 eggs a week.

At a minimum it is suggested that you have at least 5 chickens in your coop. 8 females to 1 male is recommended for the Spanish breed, a ratio 0f 8:1.

Spanish Chickens prefer to be free range but can tolerate confinement. Ultimately the more space the better. They will need a roosting height of 2-4ft so this is why for Spanish chickens this coop would work well.

These chickens are able to mix with other breeds, especially if you have tamed them properly.

The Spanish chicken has glossy black feathers with a green undertone and large white earlobes. They have white markings on their face which start to appear after six months and become more pronounce with age.

When you first get your chickens you should feed them chicken mash, which is fine unprocessed chicken feed, until they are 6 weeks; chicken mash has 19{cfcd481556a8b43fba6af451761032bd323e94372a0c1e607} protein content which is vital to healthy development.

From 18 weeks your chickens will have started laying so it is best to gradually switch them to layers pellets, which are packed with nutrients to support your chickens’ health and give them all they need to help them with egg production, they contain around 16{cfcd481556a8b43fba6af451761032bd323e94372a0c1e607} protein.

If your chickens are smaller than average they may prefer layers mash which is essentially the same as layers pellets but is finer and can be eaten either wet or dry.

The amount you settle on should be dependent on how much they eat as you don’t want to underfeed them.

You especially don’t want to overfeed Spanish chickens as it causes scabs to appear on their faces.

You can either feed them in the morning and then again in the evening or you can have a feeder in the coop which they can eat from all day.

Chickens need ‘grit’ and this often over looked with a lot of inexperienced or new owners. If you are unsure what grit is or where to buy click here

The two most important things not to feed your chickens are chocolate and beans. Chocolate once consumed can cause heart issues which can be fatal due to the theobromine in the chocolate.

Dried or raw beans contain phytohemagglutinin which is also fatal for chickens; make sure that there are no bean plants growing in the surrounding area of your coop as you don’t want your chickens foraging any stray beans.

Mouldy food should not be fed to chickens as well as it harbours nasty bacteria that can cause all sorts of problems. In the UK it is illegal to feed your chickens scraps from the kitchen.

Your chickens should have at least 1.1 per bird with some extra space for a run where they can exercise. Chickens also need a little perch for each of them for them to sleep on and a nesting box with wood shavings so that they can lay their eggs.

Grit is vital to keeping chickens as it helps them digest their food so have some readily available at all times, I mentioned this above but its worth mentioning again.

Water to drink should also always be available, make sure to keep the water out of direct sunlight as they prefer the water cool, try and find a water container that chickens can’t knock over or step into.

You need wire fencing that has been sunk at least 8 inches into the ground all around the coop and over the top of it so it is completely protected from predators, shut the chickens in at night into the coop to ensure their safety.

It is best to make sure that during the winter months Spanish chickens are protected from the harsh elements as due to breeding they have lost their hardiness. Off the floor is best. 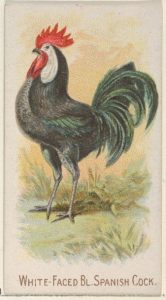 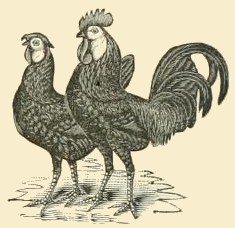