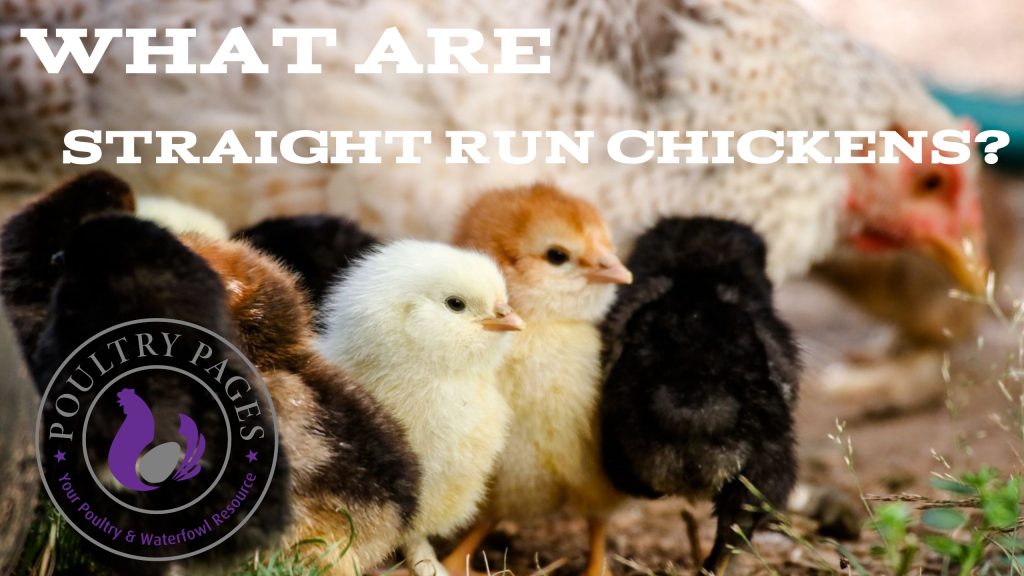 What is a straight run chicken?

If your new to chickens, like everyone is at the beginning, you have probably heard the term ‘straight run’ and wondered what exactly does it refers to?

Some of the ‘lingo’ can be confusing at first, so I’ll explain everything so you know exactly what everyone is referring too. After all, buying the new family pets is a big deal, and I’ll help to make sure you nail it!

Well in its simplest terms, straight run means unsexed chicks. This is where breeders or hatcheries will sell chicks where their sex or gender is unknown.

What do this mean for you?

It means if you purchase straight run chicks you could get both male and female chicks. Now you have a 50/50 chance of each one of those chicks either being male or female. This part is common knowledge, either a boy or a girl.

Because of the ‘unknown’ gender of the chicks, straight run chicks are less expensive to purchase than ‘sexed chicks’.

……..why you need to watch out though

Reason and statistics would dictate that if you flipped a coin 10 times the outcome would be 5 heads and 5 tails. Have you ever flipped a coin and got more heads than tails? Rolled a dice and rolled the same number more than once? I thought so, if we apply this theory to straight run chicks it means…..

You might not get an even number of females to males. If you buy a batch of 10 straight run chicks you could end up with 8 females also known as hens [that will lay eggs] and 2 males also known as rooster and cockerels. Males like in all of the animal kingdom, don’t lay eggs.

If you want chickens for eggs – then only buy females!

If you want chickens to lay eggs you will need females. Do not let anyone tell you different. To make absolutely certain your buying female chickens you therefore won’t want to purchase ‘straight run’ chicks.

As mentioned before, the place your buying from is telling you by saying ‘straight run’ that the chicks are unsexed and therefore their gender is unknown.

Why don’t hatcheries or breeders tell you if they are males or females?

Because even they don’t know with most breeds. Baby chicks are predominately sold at a day or two old. At that young age they can all look alike. Meaning the girls look just like the boys.

With some breeds it is nearly impossible to tell until several plus weeks old whether they are males or females.

So calling the chicks straight run is them indicating to you they don’t or haven’t, the way of determining the sex yet.

From a batch of 10 you could be lucky and get all the genders you want, or be unlikely and get none. It’s a gamble in other words.

It has happened where backyard chicken enthusiasts have ordered straight run chicks hoping for all females and after a few weeks when they were able to sex them, by their feathers, realized they had all males – and therefore no eggs would be laid in that backyard!

Straight run chicks are usually the offspring of parents of the same breed. So a Rhode Island Red female and a Rhode Island Red male. This is because the parents are the same or similar color meaning the chicks will be too, making them difficult to sex at birth. This is because mixing two of the same breed is the best way to create a thoroughbred chick, with a ‘pure’ bloodline, which is popular amongst breeders.

So if straight run chicks are unsexed, can they sex certain other chicks? Yes.

What is the opposite of straight run chicks?

The opposite of straight run [unsexed chicks] is therefore sexed chicks. [Sexed chicks then by rights should be called ‘unstraight runs’. They aren’t, no idea why, that term just does not exist]

…hopefully your still with me and this is making sense?

Yes certain breeds of chicks can be sexed, ie there gender known on the day of hatching!

Is it always colors or markings or is there another way of determining the sex?

Yes, there is another way; it can be their defining features, here’s a simple video showing and explaining more.

Moving on one step further……

An example of a sex linked breed is the cleverly named ‘Red Sex Link’ chicken also known as ‘Golden Comets’.

What happens if the breed you want are NOT sex linked chickens?

OK, don’t panic there is a solution. It will just require a bit of waiting.

Chickens can all be sexed as pullets or juveniles. At the latest around 16 weeks old. So you are now looking for the breed of chicken you want with either the word pullet or juvenile, before or after it.

But there’s more; and this is the important bit:

What is a pullet?

A pullet is the term normally associated with laying hens, hens specifically bred for egg production. Rather than for meat production i.e ending up on our food store shelves.

A pullet refers to a female [hen] that’s is under 1 year old. That’s a fact. However the term is often loosely used, with no real clarification, to also mean a hen that hasn’t yet laid her first egg.

So it can get confusing sometimes, but if you know, which you now do, you can ask for exact clarification without looking stupid.

Yes and this is practiced amongst breeders and great for people who don’t necessarily want a ‘pure’ breed chicken as it usually involves crossing two different breeds.

Cross breeding has been happening for centuries anyway. A Rhode Island Red although it has been accepted by the American Poultry Association as a ‘proper’ breed in its own right for years, was infact ‘created’ by breeding two different breeds of chickens. Its a cross between a red Malay game, giving it its famous red colour and a Leghorn chicken.

So two straight run chickens can create a sex linked chick, this can be done, for example, by crossing a female Plymouth ‘Barred Rock’ with a Rhode Island Red male. The resulting female chicks are identifiable by their black heads and the males have white dots on their heads.

That can surprise people, as that’s often not thought to be the outcome. What people think is the females will carry on being barred and the males will be red.

Why is this not the case?

So yes it’s very possible to create sex linked chicks but perhaps not with the outcome that you might have expected at first.

All this talk of hens and eggs, does no one want cockerels/roosters…?

Straight run or not has no bearing here, its another ‘unused term’.

And no, not at all, roosters are needed, as roosters ‘rule the roost’ so says the expression. Meaning the rooster in a flock of hens will be ‘in charge’.

He will act as the flocks [a flock is the term given to a group of chickens] protector helping to make the hens feel safe.

Now it’s not known exactly why cockerels crow. A crow is when they ‘call/shout’ at the top of their lungs usually the expression ‘cock-a-doodle-doo’ is used to describe a cockerels crowing.

We surmise, that a cockerels crowing is similar to a lions roar. Often described as a farmer alarm clock, as they crow usually very early in the morning. It’s thought to be done to warn off any predators and let any predators know a cockerel is within the flock and how ‘brave and strong he is’… cute right?

Roosters also keep hens from bullying each other. If there are acts of bullying the rooster will hurry over and stop it immediately. Flock police!

It’s also very commonly reported amongst backyard chicken enthusiasts that having a rooster in the flock will encourage more laying.

So males are required to promote good egg laying and peace and harmony within a flock.

How many roosters do you need in a flock?

It varies amongst the different breeds. For example the best breeding ratio for Brown Leghorns is 12:1, so that’s 12 females to every one male chicken. So 24 brown leghorns females would require 2 male chickens.

Other breeds require just 1 male amongst 4 female chickens giving a ratio of 4:1.

The average ratio is about 8-10 females for every one male chicken. This is regarded as the best ratio for a backyard flock. Too many males and they fight each other in displays of ‘machoism’ in front of the ladies, in order to establish their place at the top of the pecking order.

Will chicken eggs be fertile if there is no rooster?

No they won’t be. The job of the male is to fertilized the eggs. Then in the right conditions baby chicks will grow and hatch from the eggs.

Hopefully that has not just helped with explaining straight run chickens with some examples, but it also further explained what sex linked chickens are.

I’m hoping this will aid your new purchase of chicks and chickens or breeding of chickens.