The Black Sumatra fowl is a native of Sumatra and as far as is known, they are as pure blooded today as when first introduced into America from Angers Point Sumatra in 1847.

At this time they came under various names Sumatra Pheasant game, Sumatra Ebon Game and Java Pheasant Game. They are without doubt some of the best fliers, reportedly flying 5 miles from the island of Sumatra in Indonesia to Java!

Because of its double spurs, it was desirable for cockfighting purposes. However, because of poor timing, it arrived in England at about the same time that legal cockfighting was abolished. It is believed that this breed would have become very popular if this law had not been enacted.

The breed was admitted into the American standards as early as 1883. They were brought into Britain in 1902 by Frederick R Eaton of Norwich.

They are on the critical list and breeders all over the world but mainly in the UK and America are doing all they can to save the breed from extinction.

At around 25 weeks. The hens will begin laying later into the season than other breeds

The males were originally imported for there fighting ability so this may not have totally bred out of them so not necessarily a breed to have around children. They are mainly aggressive around other males of the same breed not other roosters of different breed. A beautiful breed however and very attractive to look at, they make a real show piece.

I nicknamed them the Mick Jagger chicken. Mick Jagger is the lead singer of the rolling stones, the rock and roll band, as is renown whilst on stage for his ‘strut’. The Sumatra has the same strut and swagger. Plus its very very gracious too.

How do I tame chickens?

They might take a while but its certainly very possible, the males longer than the females, however. Start with throwing treats into the coop so they associate you with being safe and they will gradually build up trust. Taming the Sumatra is much easier to do if you’ve handled them as chicks, and id say three times day minimum would be beneficial whilst chicks.

Males could fight other roosters of the same breed so one is probably best per coop. The females however are fine living with each other and they make great mothers. 9 females to each male (9:1) is the breed ratio for the Sumatras.

As per normal with chickens the floor space is a minimum of 11 square feet (1.1m2) per bird. This particular breed though needs slightly more attention to the space they are in as they can jump six feet (1.8m) – thats even with their wings clipped! So, I’d recommend a high fence or have netting over the top to keep them contained.

This is a fowl of graceful form and distinct carriage, with the richest of lustrous, greenish black plumage throughout. Its characteristic is the long flowing tail of the male, which has an abundance of long sweeping sickles and coverts. Multiple spurs are often found on males. Other characteristics are length and breadth of feather, extremely lustrous, greenish black plumage color and practically no wattle development. 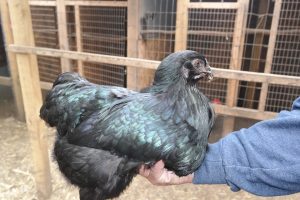 0-6 weeks they need ‘chick crumb’ this is great for developing chicks as they grow a lot at this stage and need the right nutrients.

6-18 weeks a ‘growers mash’, found at any good feed store or online is perfect for their development now.

At 18 weeks onwards they will start to begin egg production, so laying amazing eggs, so need ‘layers pallets’.

Well in the UK its illegal to feed your chickens scraps from the table, so be wary of that. Two things all chickens can’t eat however are chocolate and beans. There is an ingredient within both that causes cardiac arrest within chickens. So don’t make the mistake of feeding them the incorrect food.

Remember too that if food is mouldy, they shouldn’t eat it. Chicken get ill just like the rest of us, so if you have something in the house going mouldy, I wouldn’t take the risk of feeding it to your backyard flock.

Yes, a metal one is slightly more to buy but it will be worth it over the long run, this one looks very sturdy.

They are slightly heavier and therefore are less likely to be knocked over too. Great if you out all day at work and the chickens are left alone during the day, you can worry less. Id recommend one bigger than you need in the event its really hot in the day and the chickens require more water than usual – again less stress and one less thing to worry about.