Originated in Holland but remains far more popular in the UK and Australia. This breed of chicken is probably the most recognised in the whole. Remember the breakfast cereal ‘Kellogg’s’, well the chicken in the Kellogg’s logo is a welsummer. Not only that, the welsummer is popular with royalty no less! His Royal Highness Prince Charles, the Queen of Englands eldest son, keeps them in his backyard, and is a patron of the Welsummer society. Hmm not bad for a breed most people haven’t heard of.

The history of the breed again like most isn’t really brilliantly documented so no ones really sure from what breeds did the welsummers come from but they are reputed to be made from breeds including partridge versions of Cochin, Leghorn and Wyandotte with later additions of Barnevelder and Rhode Island.

One things for sure they came originally from the town of Welsum in the Netherlands and were bred shortly after World War 1. The town has a statue of the bird which takes its name, the locals are very proud of the bird. The breed has only really be in existence for under 100 years.

Welsummer Chickens were created at the same time as Barnevelders but on the Ysel river. Imported initially in 1928 to the USA and classed as the heavier light breed.

The American poultry association only admitted them in 1991, they are classed as continental. However they were admitted to the poultry club of great Britain far earlier, in 1930.

They make a sturdy breed than should live for 10 years+

Chickens should start laying around 25 weeks 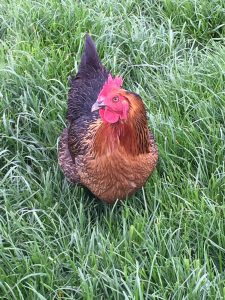 Yes they make great pets, they aren’t the really cuddly breed but don’t mind at all being handled and will feed out of your hand as mine do. Very docile and non-aggressive so would be great keep around children.

They are apparently very intelligent birds, and also don’t bully the other chickens so make a great all round hen to keep.

I find ours quite noisy and reading up on them other Welsummer owners find the same thing, so it’s the breed, bare this in mind if you plan to have them close to your house or a neighbors house.

They prefer the cooler climate but will tolerate heat if they have access to shade and an area to cool off, if where you live you have really hot summers. However the males with their large combs can get frostbite so not recommended if you live in a really cold area.

How do I tame Welsummer chickens?

Really quite easily, mine were eating out of my hand no long after I got them. They are smart birds and as such might be wary at first. However if you slowly integrate yourselves around them, giving them treats, they will see you as ‘safe’ and ‘secure’ and will begin to feed out of your hand shortly after.

Ideally 2 if your going to introduce them into an existing flock in your back yard. If your starting from scratch and have no chickens then 1 should be ok as I never had a incident of bullying from them or to them.

6 is an ideal number to have as a backyard flock. Who wouldn’t want the lovely terra cotta speckled eggs they produce, they are a hit in my backyard and should be in your too.

They do love to forage and are brilliant at it. Finding lots of insects etc to eat during the day which is a great healthy way to supplement their feed. They will handle confinement, however.

Not great flyers so won’t need a really high fence

Yes I’ve never had an incident of bullying from, or to, any other of my chickens. 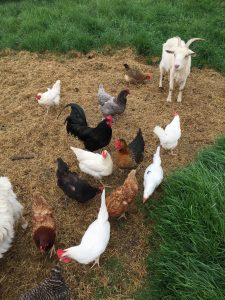 Generally, they have a feather pattern that looks quite ‘partridgey’. Most of the body is covered in dark brown feathers, but with light brown/white shafts.

The neck feathers are a darker/golden brown color and this gives them a really distinctive look.

The comb, which is a single comb with 5 points, along with the wattles and earlobes all should be red.

The rooster’s saddles and hackles are a wonderful chestnut color. Whilst his under feathers, sickles and chest are a spectacular deep beetle green. 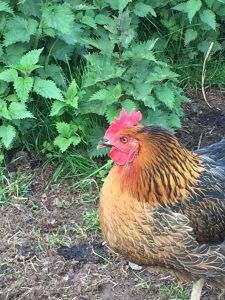 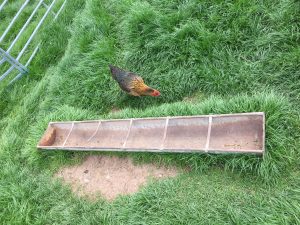 Chicks will need to eat either chick mash or chick crumb, its perfectly developed for them and contains all the right ingredients to them the nutrients they require at the early stage.

What’s recommended is at 18 weeks feed your chickens layer pellets, they are from this stage ‘on the point of lay’ meaning they will lay you your first egg very soon! Layers mash and layer pellets will then provide everything they need from 18 weeks onwards.

Fully grown Welsummers are great foragers so will supplement the feed you give to them and aren’t lazy so should be quite active. This being said generally they will eat between 2.9oz (80g) and 4.2oz (120g) per day.

Like all chickens, Welsummer must not eat beans or chocolate. These two foods,  just singularly can kill chickens, causing fatal cardiac arrest. It might be worth pointing out that in England, its illegal to feed your girlies scraps from the table.

Anything mouldy too is a big no no, I mean if you wont eat it, chickens probably shouldn’t either.

Chickens need grit to digest their food. Not sure what grit is or where to buy some click here

Some good (doesn’t have to be that high) fencing that will keep them safe from predators like foxes and cayotes.

A feeder, doesn’t have to be anything to fancy either plastic or metal, but you can guess which will last longer……..(the metal one!)

What I do recommend is a metal waterer like this one, or one similar, chickens really like cold water

They are also abit heavier so won’t be knocked over, meaning you chickens won’t spend the day without water if you’re out, and they do knock it over. Mine in the photo has lasted 10+ years so worthy of the initial investment 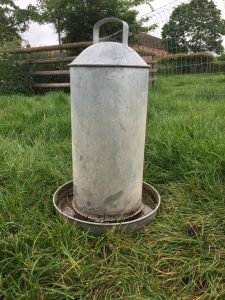 They need to roost between 2-4ft off the ground so if youre in the market for a coop bare this in mind, again something like this would work, or something similar.