The Silver Laced Wyandotte is the parent variety of the Wyandotte family. It originated in New York State. It was first known as ‘American Sebright’ and ‘Sebright Cochin.’

The true origin is shrouded in mystery……. The Dark Brahma and Spangled Hamburgs were used by the originator of the ‘American Sebright’ was evidenced by the cropping out of the Hamburg comb and Dark Brahma color markings in some of the earlier Eastern strains. Classification is ‘heavy soft feather’.

Some lay light brown and others

The golden laced variety can lay up to 260 eggs per year.

Around 18-25 weeks, they are a larger, heavier bird and as such can take slightly longer to lay eggs than other smaller breeds however they as a breed do mature fairly quickly.

Yes the Wyandotte chicken would make a great pet as they are so friendly. Also they are a very docile bird meaning they would be a very good fit for children. However on the odd occasion this breed can be aggressive…

How do I tame Wyandotte chickens?

If you have chicks start by handling them 3 times a day so they begin to get used to human interaction and build up trust with you. They will be easier to tame if you have them from chicks, but they are so friendly and docile anyway as a breed they are great to tame and will naturally show you affection.

I have introduced one hen to my flock of 10 chickens with no issues. Typically best bought in twos as then they have a best, however a great sized small flock is about 6 chickens.

They don’t require any more space than other breeds and can handle both confinement and being free range, however as a generally rule of thumb no less and this is absolute minimum of 11sqft per chicken (1.1m2).

Golden Laced Wyandottes ( as shown in the photo below) originated in Wisconsin. They were produced by mating Silver Laced Wyandotte females with a cross-bred Partridge Cochin-Brown Leghorn cockerel. The golden laced variety is very popular and has both males and females are distinguishable by their unique plumage and black tail. 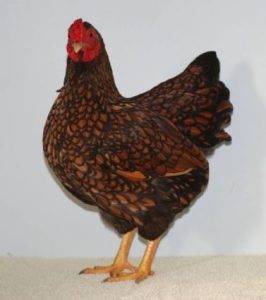 The color pattern of the Sebright Bantam has been more or less of an ideal for breeders of Silver and Golden Laced Wyandottes. It is one that should conform to the larger size of the fowl by having more sharply defined and wider black lacing to harmonize with the broader oval center of the feather.

White Wyandottes came from sports of the Silver Laced in New York State. The feather is important in Wyandottes, especially in the White variety, where broad feathers and smooth plumage characteristic of the Wyandotte.

Columbian Wyandottes were named for the 1893 Columbian Exposition held in Chicago in 1893. This variety was produced by crossing a White Wyandotte and a Barred Plymouth Rock.

Nothing special about keeping a  Wyandotte chicken, feed them as you would any other breed. Thats chick crumb or mash upto 6 weeks old.

Move them onto growers mash after that, then at around the 18 weeks, begin to transfer onto layer pellets this will have all the right nutrients for them to lay gorgeous brown eggs for your breakfast table!

Chickens, regardless of breed, eat between 2.9 oz (80g) and 4.2oz (120g) per day. The Wyandotte aren’t renown foragers so may well eat 4.2oz a day of feed from yourselves. They are moderately large birds remember. Grit is essential especially so a bag of grit should be near the top of the shopping list – it looks like this

Please read – the two main offenders are chocolate and beans, dried beans being even worse than non dried. Feeding your chickens beans or chocolate can result in death usually through cardiac arrest, so you have to be very vigilant. Beans can usually sneak in if you feed chickens scraps, which is infact illegal to do in the UK. Yes that’s right its illegal to feed chickens scraps in the United Kingdom!

Mouldy food is another bad point, to leave the playing field if you wouldn’t eat it – hens shouldn’t its thats simple. Remember they can go and tell anyone they are unwell and alot of the time can suffer in  silence so feed them anything that could cause harm- they will love you for it!

For all the information you need on feeding chickens – read this!

Where To Buy Wyandotte Chickens

They now will post fertile hatching eggs with great success. Check them out