The Yokohama is derived from the Japanese long tail clan and its forbear in Japan is known as the Minohiki and was bred from two game breeds: the Shokou and the Shamo. The Shokoku is a very old Chinese breed dating back to the 8th century.

The original long tails were found in China but successively developed in Japan in the seventeenth century.

Although being developed from the two game breeds the Minohiki was kept as an ornamental bird. Hardly surprising given its beauty.

Why are they called Yokohama?

So when the Minohikis made their way to Europe in the 1880’s they were named Yokohama as this was which port they were shipped from in Japan!

Yes they would make great pets as they are easy going and really quite docile. So very child friendly as a result. Remember though this breed has a very long tail and thus can be difficult to manage.

Note: Yokohama roosters have known to be aggressive around other roosters. Think twice if you already have a rooster in your backyard flock – ask the breeder if they have seen any aggressive traits before you purchase.

Doesn’t really fair well in the cold so great if you live in a warmer climate.

How do I tame Yokohama chickens?

Quite easily, start by regularly entering the pen/coop or generally vicinity and start to build up the trust. This can be don’t at feeding time and over time they will feed from your hand and probably come even when called! Once tame they will love cuddles.

Ok so purchasing just one and entering it into an established backyard flock could cause issues due to the tail getting pecked or stepped on. This does depend on the other birds you current have in your flock or plan to have in your flock. Better bought in twos.

They need slightly more space than the average 11sqft per bird that’s normally recommended as a minimum for chicken breeds. This extra space is due to the tail! Recommended roost height is 4+ft, so measure up your coop before purchasing or buy a coop to with the right roost height as its important.

They need dry and well bedded housing so not recommended for damp muddy coops.

Yes, they are of average size so no bullying should occur, its just the length of the tail that needs to be considered.

They have the most striking plumage and of course a long tail which can grow up to 3ft a year! The males have long and abundant saddle feathers, as well as the long tails. 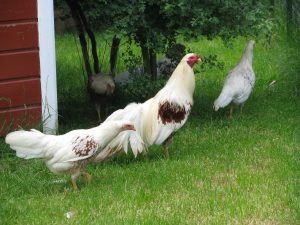 They don’t lay many eggs and slow to mature but do make good mothers. Available in bantam

18-26 weeks in (as the Yokohama is late to mature) your chicken, if female, will be on the ‘point of lay’ meaning its nearing starting to lay eggs! Layers mash or layers pellets are great as it contains everything they will need for the rest of their lives.

Chickens need ‘grit’, not sure what grit is or where to get it from click here

How much should I feed Yokohama’s?

Yokohamas that are laying will eat 2.9oz (80g) upto 4.2oz (120g) per day depending on climate and time of year. You can place feed in the feeder and for them to have throughout the day or feed in the morning and before you shut them in the coop, its preference.

There a quite a few surprising foods that your shouldn’t feed your chickens but the two main offenders are beans and chocolate. Chocolate for chickens can be fatal so completely avoid. Within the beans both raw or dried there is phytohemagglutinin, which can cause serious issues for chickens.

One more thing, table scraps, whilst actually illegal to feed chickens table scraps in the UK in the US its not. Just remember that anything moldy shouldn’t be consumed by chickens if you wouldn’t eat it they probably shouldn’t either.

You’ll firstly need a coop. So a minimum to work with is chickens need 11sqft per bird (1.1sqm) ideally in a run they require 25sqft per chicken although the more space they have generally the happier they are. You need to remember Yokohamas like to roost 4+ft off the ground, probably due to their long tail, so bare this in mind. This one is great for Yoko’s.

Waterer – chickens like cold water so get a waterer that can hold more than a days water so you don’t have to worry. Place this on flat ground so it cant get knocked over and in the shade.

Chicken feeders – I’d recommend a metal one as they last longer, but do cost more than the plastic ones.

Grit – chicken need grit to help them lay eggs, this is recommended to be placed in a separate container than the feed.