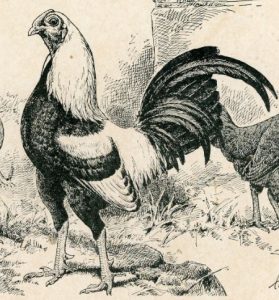 The Old English Game bantam history is rich with twists and turns. The fowl was originally brought to England by the Romans in the 1st century! They were an alert bird that liked to forage and could even live wild, but most of all were excellent fighters!

Cock fighting in England was extremely popular, it was so popular it was even introduced into public schools as a way to build character qualities within students similar to those shown by the old English whilst fighting!

Those fighting skills were no longer required after 1849 when cock fighting was banned in England. This would normally mean the breed would fall into disrepute or could even mean its total extinction. Luckily it coincided with a rise in popularity of poultry fancying; showing birds in competitions or exhibitions.

The Old English Game fowl built up a unique appearance from its fighting days developing muscles in areas which gave it its very special look. These looks include broad powerful shoulders and short but very strong legs. Its beak is also long by comparison to other breeds, that was used whilst fighting for pecking.

They have one of the longest recorded histories of all the chicken breeds and for that reason they are extremely popular again today, with a revival of heritage breeds.

They have also mellowed slightly since their fighting days, which ended over 150 years ago, making them much more suitable for backyard flock settings, but they are still no ‘softies’ that’s for sure, retaining that character everyone loves!

The American Bantam Association has recognized 40 varieties, making it one of the most diverse Bantam breeds!

Temperament – are they good as pets?

They are a ‘plucky’ confident breed that are very sure of themselves. They have real character which makes them one of the favorites amongst all bantams. Kids love them especially, due to their size.

So they are well known for their previous fighting ability and whilst this isn’t as active as it was before, they sure know how to defend themselves. For this reason two cocks aren’t recommended in the same flock as this could lead to ‘squabbles’.

Although this isn’t always the case so it is best to check with the breeder as sometimes they have been cross bred, so lots of that aggression has been bred out. Sometimes you can get very fairly placid roosters that can live amongst other males quite happily.

The males can still be very ‘macho’ ‘strutting’ constantly in front of the hens. Think of it like the Mick Jagger walk, the lead singer for the rock band the ‘Rolling Stones’. The males are great though within a flock, helping to keep bullying from occurring amongst the hens.

The hens make super mothers, being very protective of chicks and will usually want to raise a brood during spring/summer. The hens will mix well with the same breed, and with other breeds, making them very versatile.

So, yes, they do make excellent pets living up to 15 years in most cases, they also make great broodies, kids love them, and roosters work well in flocks…so what’s not to like.

How do I tame Old English Game Bantams?

Well they are naturally fairly wild, loving to forage and free range but they will tame up to enjoy a cuddle! Start as chicks by just handling them 3-4 times a day, then as adults they will be well socialized with you.

If you purchase an Old English Bantam as an adult, try the cupboard love method. Treats work well with everyone – bantams are no different! Start by throwing some treats near to them and then gradually they will build up to be eating from your hands.

The breeding ratio for Old English Bantams is 9:1. So that’s means 9 hens to every one cockerel.

Bantams require 2-3sqft per bird as a minimum within the coop. Coop space isn’t usually the issue with Old English, it’s the outside space. They need free range conditions, but will tolerate some semi confinement depending on the size of it.Typically most bantams need a minimum run space of 4sqft per bird. That isn’t enough for Old English Bantams, they require more to be happy.

They don’t need much roost space width wise, at around 5 inches.[ So that wing to wing space]. They will need slightly more in the summer as they space apart to allow air to flow between them to cool themselves down. They do the opposite in the winter, bunching up to keep warm!

Old English Bantams roost at 3-4+ft high! People find it odd that a small bird would like to roost so high. They are often the highest roosting bird in peoples flock! You will need a coop then that can accommodate this roost height. Ill suggest a coop that’s perfect for Old English Bantams at the bottom of this article.

Yes roosters will work well in flocks, protecting the hens and sometimes even helping raise up the chicks, which is very uncommon and quite special.

The hens will mix well with other bantams and not being a docile breed like a Silkie, they can be around active, alert birds. I have introduced them into a standard size chicken flock i.e non bantam, with little issue.

You shouldn’t ever really introduce less than 2 birds to a new flock. Introducing any new birds to a flock can unbalance the natural pecking order. The birds ‘incharge’ at the top of the pecking order can and will let the new comers know who’s the boss. This can just normally be a peck on the head, if its prolonged or any fighting occurs that doesn’t diminish, then you could need to separate the offending birds. For this reason then, new comers, introduced in a minimum of a pair atleast will have ‘buddy’.

Allowing 1 feeder and 1 waterer/drinker for every 6 chickens is key when introducing a new Old English into a flock, as certain birds can ‘guard’ the food and water. Old English are still a fiery breed so allowing an extra of each, feeder and waterer, will ensure there is minimal disruption, and help create some harmony.

The full list of all 40 Old English Game Bantam Colors, currently accepted by the A.B.A are:

They have a small 5 pointed single comb. Their small and smooth wattles and earlobes are all bright red, unless noted otherwise below in the specific varieties. The earlobes are dubbed (removed) in males when being shown in a competition.

Of the 40 varieties that are accept by the American Bantam Association [A.B.A], the most popular varieties are the 4 below:

Absolutely stunning looking with a standard all white plumage and light horn beak. The shanks and toes are white tinged with pink and the eyes should be red.

Standard silver duckwing plumage, the eyes should be red and the beak horn shanks and toes are white tinged with pink.

The males have white heads, giving way to silvery white hackles and back. Front of neck, body and breast are fawn. Wings and tail are highlighted in silvery white.

The females are primarily shades of silvery fawn but with some gray flecking. Neck and breast have a pale salmon front. Wings are blue and gray. To the rear, a fawn tail with gray highlights.

Standard black plumage and black shanks and toes. The wattles, comb and earlobes are mulberry to red with the eyes being a dark brown. 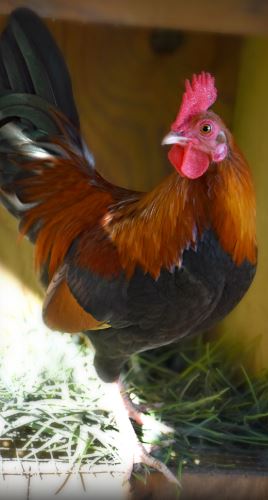 Standard black-breasted red plumage with the beak being a light horn and the eyes are red. The shanks and toes are white tinged with pink.

As chicks they will eat chick crumb or starter chick, both the same thing just called slightly differently. They will eat this up to 6 weeks old.

At 6 weeks old they need to be switched onto a growers mash, this contains all the right nutrients they will need to develop properly.

From around 2 weeks before first laying, they then need to be switched onto Layers Pellets or Layers Mash. This contains exactly the right ingredients to help them lay eggs. With Old English Game Bantams they need ‘Bantams Layers Pellets’.

In essence it’s the same as standard layers pellets just smaller. [It’s so they can easily swallow them, being that bantams have smaller necks than standard sized birds.]

As chicks, up to laying their first egg, its normal to leave a feeder full of food so they can eat anytime they want.

They won’t have developed ‘meal times’ yet. They will sleep anytime during the day and could eat anytime during the night. Having a feeder full of food will ensure they have access to feed whenever they like and this won’t stunt their growth.

As adults they will eat roughly 1.4-2.5oz (40-70g) per bird per day. They tend to eat less in the hotter summer months and more in the winter months to burn calories to keep warm. Old English game bantams are a hardy bird but can still suffer from heat stress or exhaustion like any birds can. So during the summer when they are eating less I feed them high water content fruits like cucumber or watermelon. This gives them a super all-natural treat and gets in that much needed hydration!

Males can stress from ‘showing off’ in the spring/summer being particularly sexually active, this is normal and mimics what happens naturally in the wild, but it’s really important they have access to fresh drinking water and shade all the time.

Two things no chickens should be given is chocolate or beans. Dried beans being the worst offender. Be really vigilant then if you plan to feed them scraps from the table [this is banned in the UK]. Or, as they like to free range, ensure they can’t access any bean plants growing naturally.

Oh and you’ll have to just do them the favor and eat the chocolate yourself so they can’t – tough keeping chickens isn’t it…!

What do I need to keep bantam old English?

Being a miniature/bantam people assume they don’t like to be ‘off the ground’ – wrong. They love being up high. You therefore you want a coop with a 3-4+ft high roost perch. 2-3sqft per bird coop space is a minimum so I’d say a coop like a small or medium OverEz coop. They are really well designed and built using quality materials. It has two roost bars running the length of the coop, both at different heights – perfect.

If you currently hang a feeder for you existing birds don’t hang it too high, Old English Bantams are only small! 1 feeder and waterer for every 6 birds is best, it stops squabbles. I’d go with a  metal one as they last a lot longer, ok they are more money, but you’ll thank yourself in the long run.

A ‘fount’ style waterer doesn’t work well inside the coop, they spill lots of the water, ruining the floor bedding or worse, if you don’t place any down, rotting the floor.

Nipple style drinkers work best inside the coop founts are great outside.

Always place down or hang up the waterer in the shade, to keep the water cool.

A really good place to try online is Cackle Hatchery, they have 15 of the best varieties of Old English Game Bantams for sale as chicks.

My favorite has to be the ‘Self Blue’, they are gorgeous.

Cackle Hatchery are a 3rd generation family run business and ship chicks out across all states. They have really good reviews too, so you’re in safe hands.

Looking for the highest quality bantams, bred exclusively for showing, click this link