Too cold in winter and too hot in summer – suffering from the same problem?

Keeping my chicken coop in that ‘Goldilocks Zone’, where it’s not too hot and it’s not too cold, was tough. But I’ve got a heated chicken waterer for when it’s 32F below and I’ve installed a fan for when its too hot.

I’ve got everything working perfectly – I love it when plan comes together.

Certain breeds of chicken are NOT ‘heat hardy’. Meaning they don’t handle the heat well, one example of this are Silkies. Did that surprise you?

These non heat hardy breeds can suffer easily from lethargy, heat stroke and dehydration. The consequences can be fatal.

Do your bit by installing a fan and cool your coop and keep your chickens happy!

First things first – what’s the optimum coop temperature? Well you can’t ask the chickens and expect them to answer. Generally the coop should stay between 35-45F.

During the winter they huddle up on the roost to keep warm and during the summer they spread out a little. To allow air to pass between them.

Why Should You Put A Fan In A Chicken Coop?

To help air to circulate air within the coop and cool it down. But before you run out and buy anything for the coop let’s just run through a few basics.

Your coop should have vents. If it doesn’t, stop what you doing and make some. Chickens die from heat exhaustion, its that serious.

Unless it’s a DIY coop and you have made a serious error of not placing any vents in the coop, I’ll assume it has vents and carry on.

Make sure these in the ‘open position’ to allow maximum circulation throughout the coop.

Make sure there is nothing blocking the vents either inside or out. For example a chicken coop backed up against a wall won’t have as much airflow as a coop in the middle of the backyard.

Why are vents so important?

Normally overlooked by people, ventilation is actually really important, even in cold climates, that bit often surprises people. Ventilation is allowing air to flow in and out of the coop.

Heat like moisture and humidity travels hot to cold or high to low. People think of cooling as a one way street. Allowing just cold air to flow into the coop to cool it. True, but it’s not the full picture.

Example: if its hotter inside the coop than outside, the flow of air and therefore temperature direction will be outward. So this cooling effect isn’t the influx of cooler air, it’s actually the opposite it’s infact the removal of the hotter air that’s makes the coop cooler.

Why is this important?

Outflow – allows heat & moisture to be removed from the coop, to prevent excessive build up.

It also allows ammonia to be removed from the coop. Ammonia is in chicken poop and high levels cause respiratory related issues in chickens.

Inflow – To allow cool air to enter the coop during long hot summer nights & to keep the coop cool during the day when chickens are laying. (well you wouldn’t want to be too hot whilst working!)

I can see you running out the coop with a saw to create more vents, but here’s why you shouldn’t.

During winter you don’t want the opposite effect and the coop getting to cold! Again it’s the ‘Goldilocks Zone’. Remember you want the coop to be well ventilated but not draughty.

How to Check the Temperature in your Coop?

Place a simple thermometer in your coop to check your coop is in the ‘Goldilocks Zone’. Place it half way up the coop wall and check the readings regularly at first so you can get a gauge of what’s happening in there. 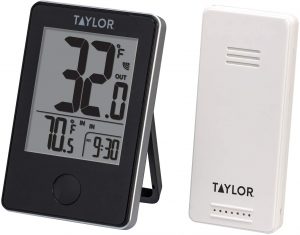 This simple wireless thermometer from Amazon like this would work well

It records the minimum and maximum temperatures of the day and is wireless up to 200ft!

Is Your Coop Too Hot? 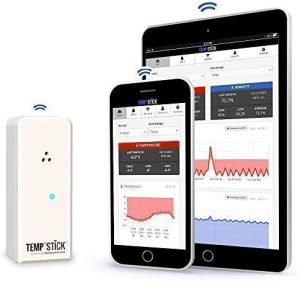 In times of extreme heat I would set up a thermometer that you can link to your phone. This will alert you too any temperature spikes. Remember fans can only do so much, you may have to take action to cool your hens down plus the beauty of this set up is it records moisture build up too, great then if you have really hot summers.

That’s given you all the information you need about ventilation and why it’s so important and the best way to monitor the coops temperature.

Let’s move on and find:

The Best Fans for Chicken Coops

I’ve saved the most important point till last:

5. It has to have a cover, a shield, whatever you call it. The blades of the fan cannot be exposed, as this could injure the chickens if they walk into it.

My favorite fan for a chicken coop is this one as the fan blades are completely covered – this with works for me with a flock of 12 chickens. 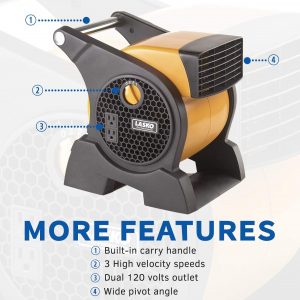 Do you live in a very HOT climate and/or have a LARGE coop to keep cool? 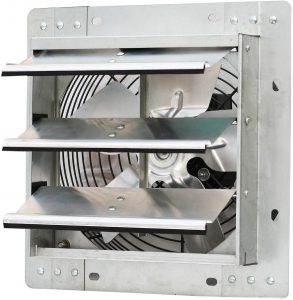 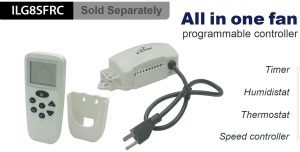 If YES, I’d install a wall mounted exhaust fan. These things are ace this one has key features like:

This is great, as you haven’t got to do a thing; its fit and forget. Both the thermo and humidistat features, will take care of the everything.

Just as important as buying the right fan. Place it down on the floor near, to but not obstructing, a vent. Why?

Because hot air rises and cool air falls. So the fan will draw in the cooler air from outside and will circulate this within the coop.

You could have it on the ceiling, facing the floor to push the rising hot air back down, creating forced convection. But this won’t draw in the cool air from outside like having the fan on the floor near a vent would. In hot states/countries ceiling fans work well but that’s because the A/C is on and the doors and windows are closed, so its more of a controlled environment.

Don’t position the fan facing directly onto the roosting area if they are sleeping. They will then have no choice but to endure it. This could affect their sleeping and then their laying.

Other cooling ideas that really work…

Try adding a Silver Radiant Barrier inside the roof. One coop manufacturer is already using this technique, which is forward thinking in my book. For those who don’t know what I’m talking about the reflector barriers I mean can be bought here.

You could also place some outside on top of the coop roof too on really hot days. Like people do with motorhomes etc infront of the wind shield. This is prevent the heat from entering so you haven’t got to then deal with it when its inside. Prevention is better than cure.

Or you could place something ontop of the roof to absorb all that heat…..maybe something like a solar panel…that could then power the fan too…

A Solar Fan for Chicken Coop

No power in the chicken coop, living off grid or just want free electric? – Awesome!

There are a ton of solar fans for chicken coops on Amazon, all different sizes and outputs. Check some out here

More than 20 chickens with a large coop?

If you live in a hot climate with a large coop holding say 20+ chickens id invest in a good solar powered attic style fan. Although a slighty more expensive option once bought you have zero bills and the brushless motor in this thing is very robust and efficient. Plus its fit and forget – we like that! 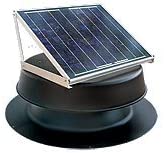 The drawback of solar ofcourse is its powered by the sun. If you plan to use a fan during the night to keep your flock of hens cool, I have to ask ‘how much sunlight is there at night?’’ None. Put simply then solar fans won’t operate unless in sunlight.

And that’s it –  keep your chickens cool all summer by investing in a good fan!

Done all the above and your chickens are still too hot? – well buy a bigger fan firstly. Bigger fans will have bigger fan blades meaning a larger movement of air.

Breeds of chickens that are heat hardy and thrive in the heat are Orpington’s, Australorps, Brahma’s and Barred Rocks. Learn more about them by clicking the links.